This would be a photo of Shivani and Aashish eating pizza.  Notice those empty ketchup packets?  They’re empty because both of them wanted a full packet of ketchup on their pizza.  Also, a few days ago they each ate two ketchup packets just straight up – no french fries, no burger, no nothin’ – just squeezed them right into their mouths.  I was an accomplice in this adventure while Amy was on a search for “chicken – no spicy” that Shivani had requested, so don’t tell her.

In the past year or so we’ve talked quite a bit to Zinnia about India, and I must have said “it’s not wrong, just different” dozens of times.  Ketchup on pizza (or just straight from the packet) is one of those many examples.  Our friends Sam and Natalia Terfa have a daughter named Layla who is Shivani’s age, and Layla LOVES ketchup on almost anything.  I’m anticipating it won’t be long after we’re home that she and Shivani will become ketchup buddies, and will hang out together and eat ketchup by the spoonful.  Not wrong, just different.

Today we went back to have Shivani and Aashish’s negative tuberculosis results verified, and then also went to the FRRO office to submit an application for the final document that will permit us to leave India next week.  I do not know exactly what the FRRO office is and I am not entirely sure what paperwork was submitted because my genius wife has been our paperwork guru.  I probably could have kept track of everything because I’m a pretty organized person in general, but I can’t hold a candle to Amy’s organizational skills.  With international adoption there are TONS of documents to keep track of for different purposes and different appointments, and Amy has had them all separated and organized into large envelopes and she actually knows where they all are in our luggage.  We haven’t yet had an issue even finding one of the papers when we needed it, let alone an issue with not having something at all.  Did I mention that I’d be in deep trouble without Amy? 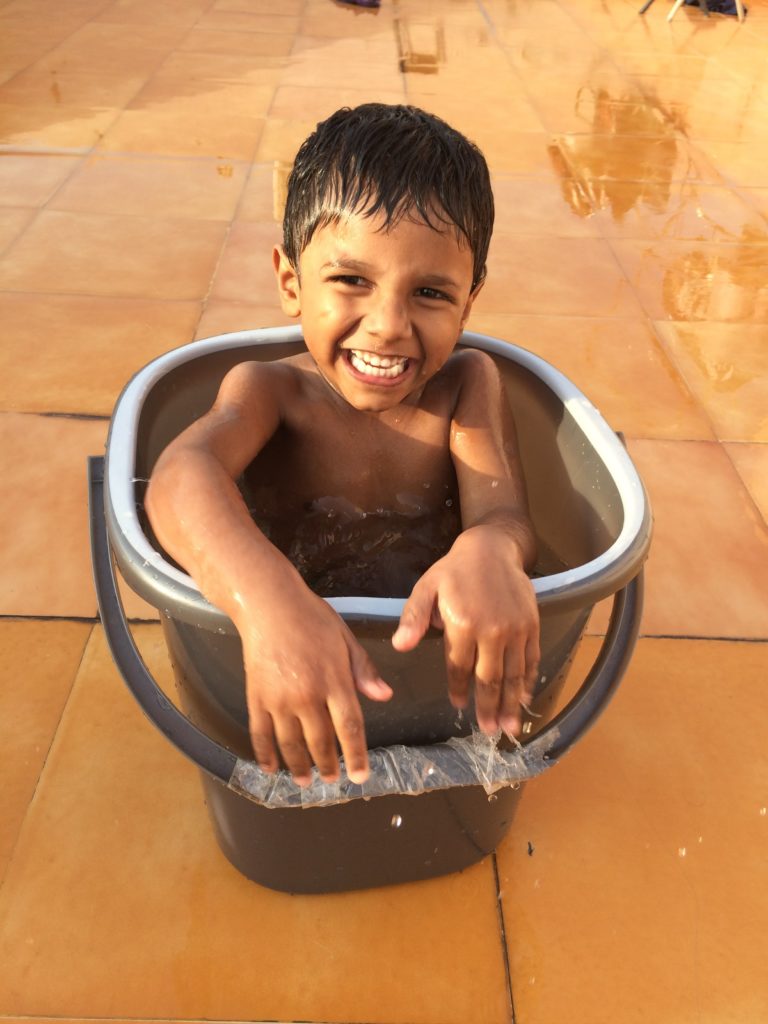 The other thing Amy did today that was a big hit again was bring our kids up on the roof in the hot afternoon sun, give each of them a big bucket of water, and let them go crazy.  You might remember that she did this a few days ago in Pune, but for that episode Zinnia was sleeping.  It was even more fun to watch with all three of them!  All three kids were super tired and kind of hyper, so Zinnia and Shivani went on this pop diva singing binge, making up songs and dancing on the slick rooftop patio tiles while holding imaginary microphones and watching their shadows on the wall next to them.  Aashish discovered after a while that he fit in the buckets, and he was thrilled.  Very fun for all of us!

Here’s the one good picture we got of Shivani and Zinnia that looks like they were not, in fact, being crazy-hyper-pop-diva girls: 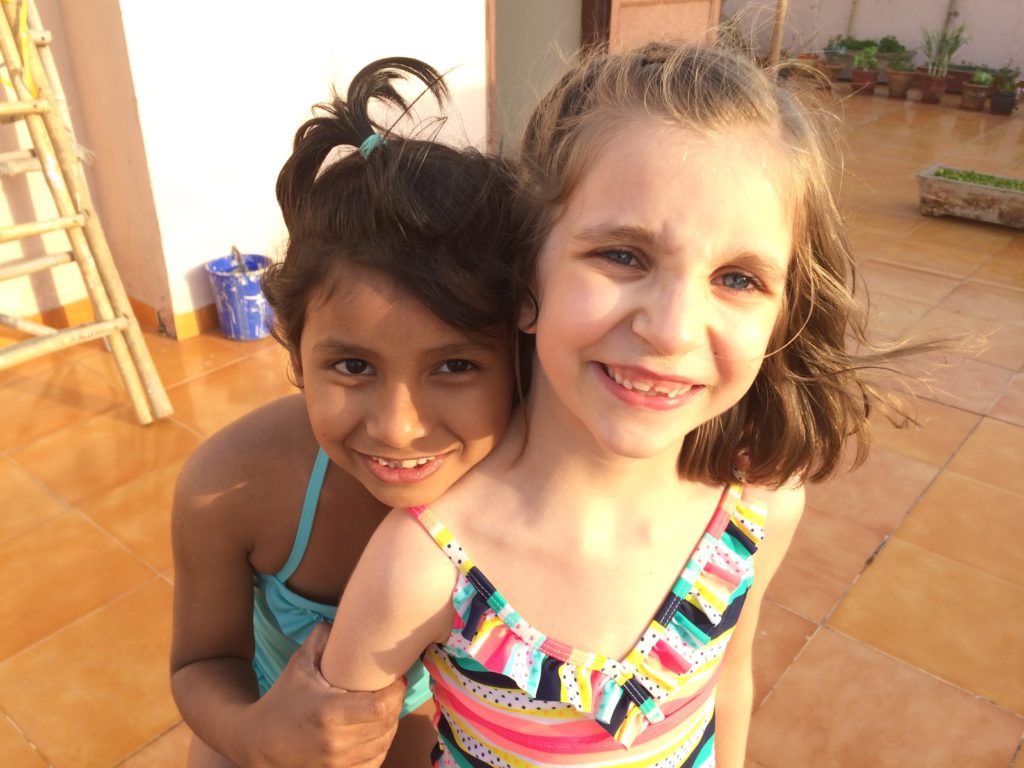 One other cool thing to report is that Aashish and I have been working on his vocabulary from time to time.  Amy packed a picture book that we used with Zinnia when she was just learning to talk, and also brought a set of flash cards that have a bunch of animals on them.  Aashish – when willing to do this – will focus for a surprisingly long time.  One time a few days ago he didn’t know a word so he said “chimpanzee” just to be funny, and we both laughed, and this has become an ongoing joke.  He likes to just throw in “chimpanzee” from time to time to be goofy, and the first few times he does it are really funny.  It gets old, but I laugh anyways because if I were four years old, I can’t imagine there’s much I would have enjoyed more than being able to consistently make my dad laugh with the same joke.  Here’s both of us being adorable together.  Is it okay for a 40 year-old man to include himself in the “adorable” category with his four year old son? 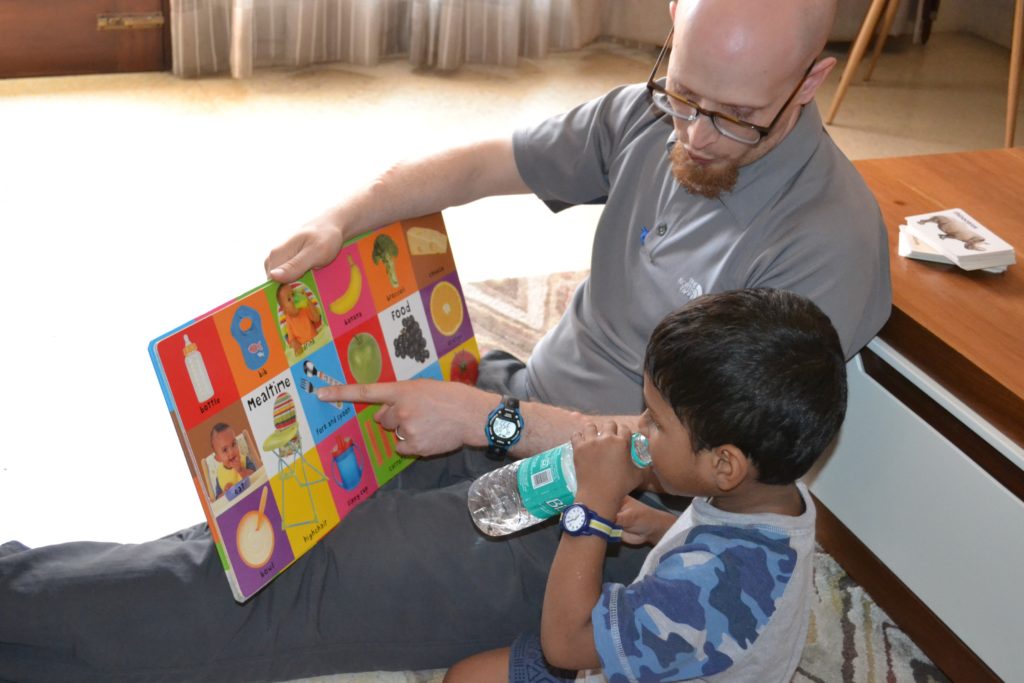 1 thought on “Not wrong, just different”