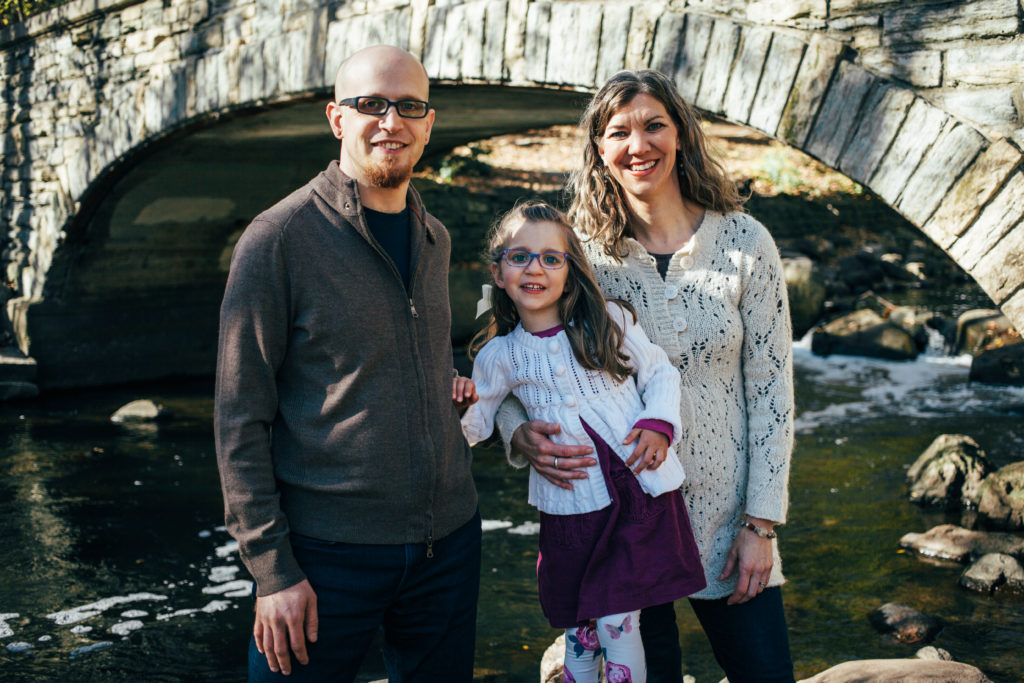 We are currently a family of three blue-eyed, fair-skinned Minnesotans:  Joel & Amy Swanson and daughter Zinnia, age 4.  We live in the Twin Cities and love most everything about calling Minneapolis our home town (except for maybe the summer road construction!).  We are hoping to become a more diverse family of FIVE in the months ahead.  Read on to follow our adoption story …

In 2007 we traveled to India for several weeks to learn more about best practices in community development, cross-cultural ministry, and human rights advocacy.  During our time there we developed a friendship with a teenage girl named Riya.  She was cheerful, curious, and quietly confident, and we both enjoyed spending time with her.  Seven years later, in 2014, Amy found that Riya was frequently in her thoughts, and felt that God was leading her to inquire about Riya to one of the non-profits we worked with while in India.  In doing so, we were pleased to learn that Riya was married, had stable employment, and that she and her husband had two young children.  However, we also learned that Riya struggled with recurring health issues that sometimes made it difficult for her to manage caring for her children.  Through prayerful consideration and a genuine concern for Riya’s situation, we felt God was leading us to become more directly involved in supporting Riya’s family, although at the time it was unclear to any of us exactly what that would look like.  During the months that followed, we continued to pray about tangible ways we might be able to provide support for Riya and her children.

Sad News and a Bold Invitation for Our Family

Late in 2015, we received unexpected and sad news.  We learned that Riya had become very ill – to the point where she was unable to care for herself or her children (a daughter, age 5 and son, age 2).  And although Riya is living, she is not expected to recover from her illness.

As parents, we cannot imagine the difficult decisions Riya has been faced with since this recent health crisis.  Neither her husband nor any living family members are able to care for the children.  She deeply desires for her daughter and son to have a family and not be cared for indefinitely by an institution.  Riya also understands that she is most empowered to shape her children’s future while living.  Knowing of our sincere desire to support her family, Riya asked us if we would be willing to adopt her children.

We will remember that conversation for the rest of our lives.  We were overwhelmed, humbled, and honored at Riya’s invitation, and we both immediately perceived that this was God’s hand at work.  After exchanging little more than a glace between us, we wholeheartedly said “YES!”  By accepting Riya’s invitation, we believe we’re both blessing her family and receiving the blessing of growing our own family as well.

Since that conversation, a non-profit in India has been walking alongside Riya and her children as they’ve begun the adoption process.  We have been amazed by Riya’s selfless decision to choose adoption for her children, knowing that she will be unable to see or contact them throughout the adoption process.  This is a HUGE sacrifice for any mother, and is a testimony to how much she loves her children.  Both children are now in the care of a licensed children’s home, and will remain at this home until they are in the permanent care of adoptive parents.

During this same time, our family has been working diligently to begin the international adoption process here in the United States through Children’s Home Society in St. Paul.  We recently completed the extensive application process and anticipate beginning our home study in early August.  Due to complicated international adoption laws, we have no legal assurance that our family will be matched as the adoptive family for Riya’s children.  However, we trust that God is at work behind the scenes and is guiding this process.  Both adoption agencies (in the US and India) involved in this potential adoption are experienced and reputable, so we are very hopeful that we’ll be designated as the adoptive family for Riya’s children in the months ahead.

An Invitation for You and Your Family

We are very excited to be on this journey and anticipate experiencing God’s blessing along the way!  As you may know, adoption is an emotional, unpredictable, and expensive endeavor.  As we move forward, we are inviting you to join us on this journey.  If you are willing to commit to pray for us regularly, please email us at joeldavidswanson@gmail.com and we will include you in our prayer updates.

We will be providing updates via our blog.  Click the “Blog” link in the menu above, or go to swansonadoptionjourney.com/blog.  You can visit the blog anytime to read the latest information.

Thank you for partnering with us on this journey!