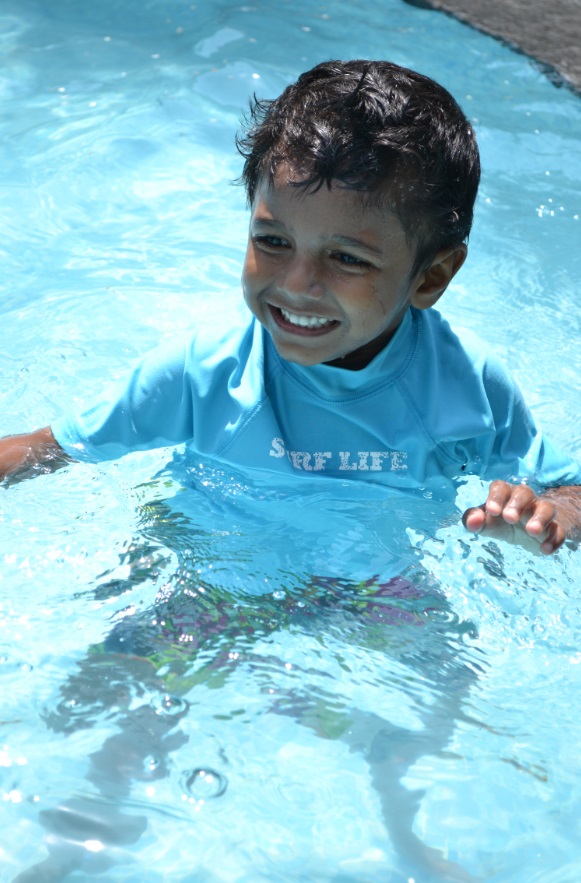 Here’s why Amy is a genius.  We were going to take the kids swimming, right?  Well Aashish was all excited about swimming, and had seen the pool the night before when we came in, but when it came to him actually getting in the water he wanted nothing to do with it.  So you know what my genius wife pulls out of her bag?  One of those squirty toy things where you squeeze out the air underwater and let it fill up, and then squeeze above water to spray.  And not just any squirty toy, a Paw Patrol squirty toy!  Has God ever made a four-year-old boy who didn’t like a Paw Patrol toy he can use to spray his dad??  Amy handed it to me and suggested I take Aashish to the decorative fountain and let him play with it.  He loved it, of course, especially the part about squirting Daddy.  After he’d squirted me a few times I asked him if he wanted to squirt Mommy, and of course he thought that was a fabulous idea.  Mommy, conveniently, was sitting on the edge of the pool with her legs in it, so he had to go right up to the water to squirt her.  After a few more rounds of me filling the thing up and him squirting Amy and me, he saw that his sisters were in the water and decided that swimming was okay after all, and climbed right in all by himself.  No fussing, no coaxing, nothing – he was good to go.  We had a lot of fun playing in the pool! 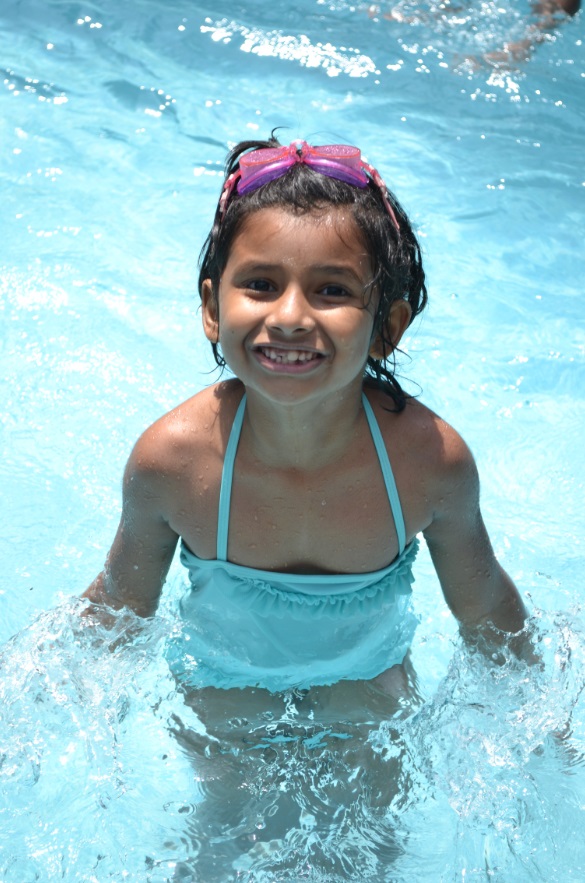 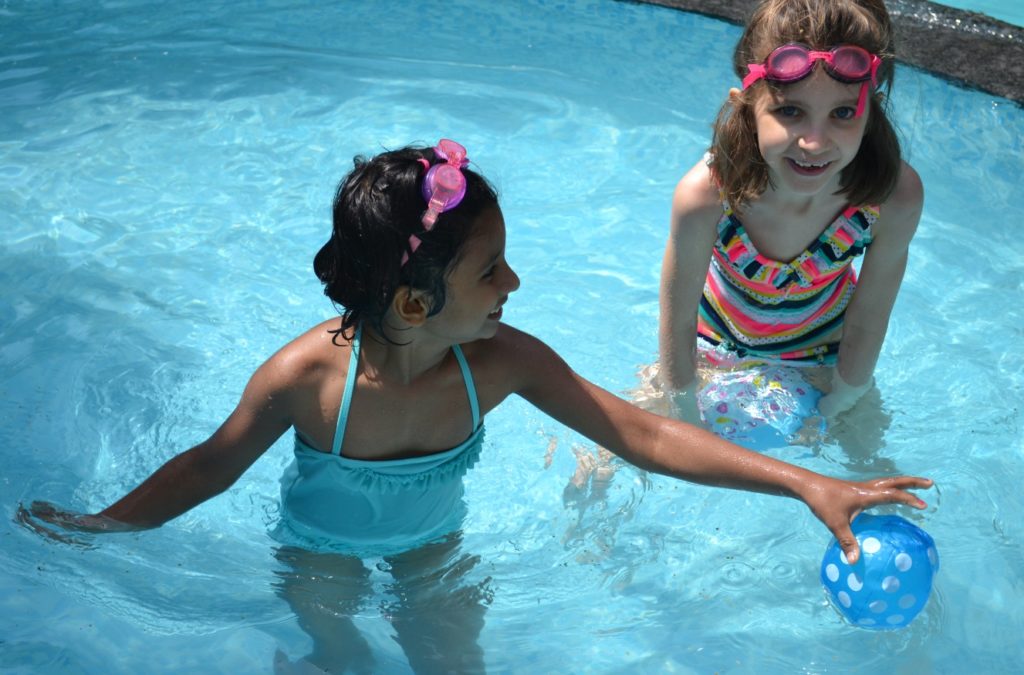 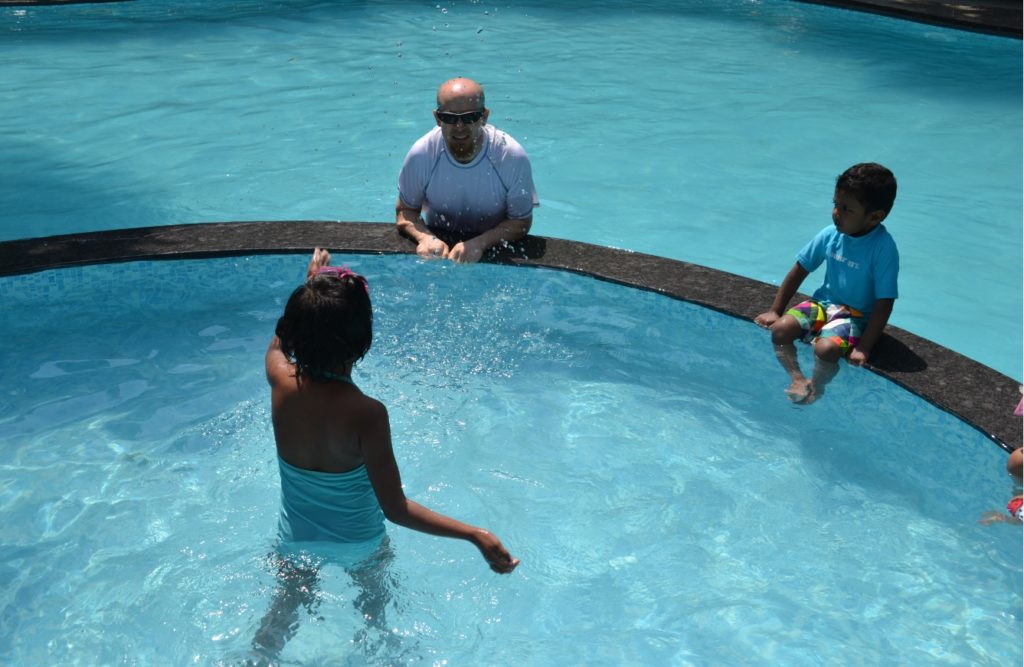 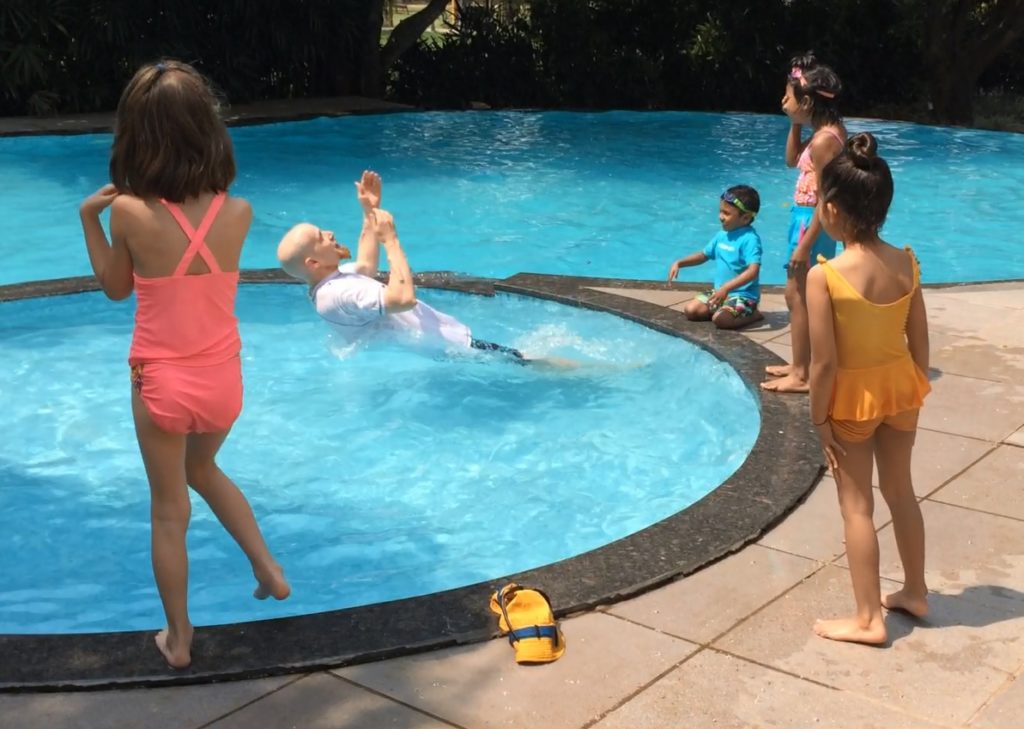 The last picture is of us playing the “hug push” game, where the kids would stand on the edge of the pool and pretend they were going to give me a hug, and then right when I got up to them they’d push me over.  They LOVED it, and I think would have played it for hours.  Zinnia has rarely wanted to wrestle or roughhouse in general, and I think that’s partly her personality but also partially because we only had one kid.  As soon as there was three of them I couldn’t be giving three piggy back rides at the same time, so a little healthy competition developed.  If one of them pushes dad they all want to, if I toss one of them onto a bed they all want to be tossed, and so forth.  Dad, I now understand why after playing with all four of us kids in a pool for a while you needed a break, and I apologize profusely for my insensitivity to that as a young kid.  My other observation regarding playing with the kids I’ve said before, but I’ll repeat it.  Amy has taken some videos of me playing with the kids, and oh my goodness I LOOK JUST LIKE MY DAD.  Same mannerisms, same gestures, same body language, same everything.  This really pleases me, because my dad (David) was AMAZING at playing with us as kids.  When you look back at family photos from 30+ years ago, they are full of pictures of us kids jumping all over my dad, who always had his glasses off, his hair messed up, and a big grin on his face.  My dad wasn’t/isn’t perfect, but wow, I hope I can be as good at playing with my kids as my dad was with us.

A few other things we’ve done:  first, we took a two-hour elephant ride through the forest.  Have you ever been in a car with a manual transmission when it juuuuust about stalls but instead ended up doing a few big lurches forward?  That’s kind of what riding an elephant is like.  The IDEA of riding an elephant is cool, but it is not the most comfortable ride, and when you’re actually ON the elephant all you can see of the animal is the back of its head. 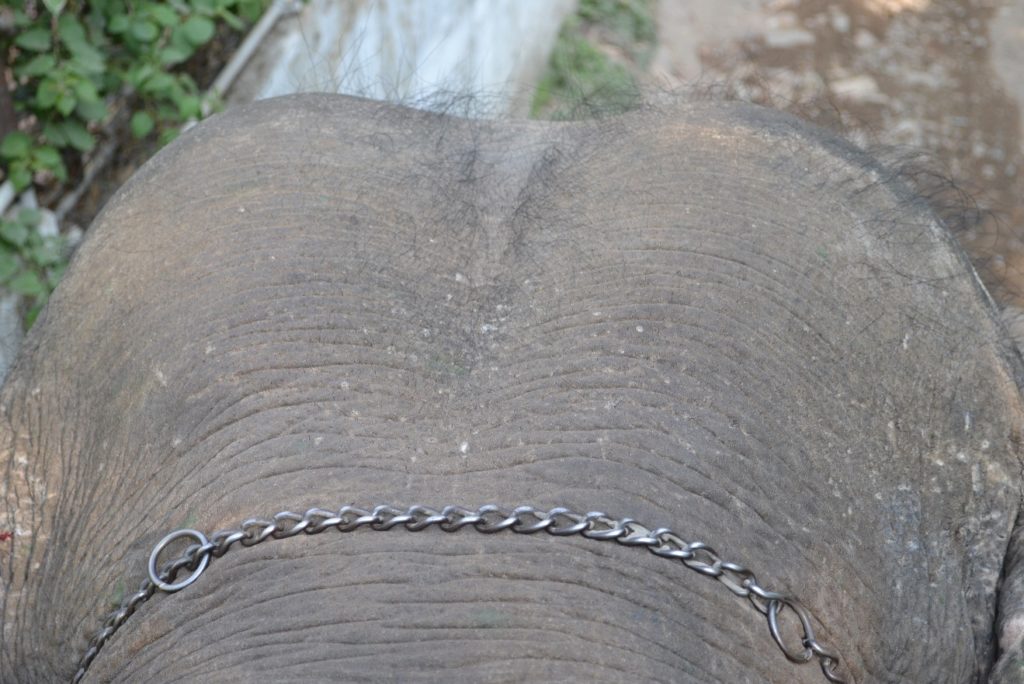 It is impossible to get a good photo of a family of five on an elephant when you’ve given your DSLR camera to someone who isn’t familiar with using one, but at least all five of us plus the elephant made it into this picture. 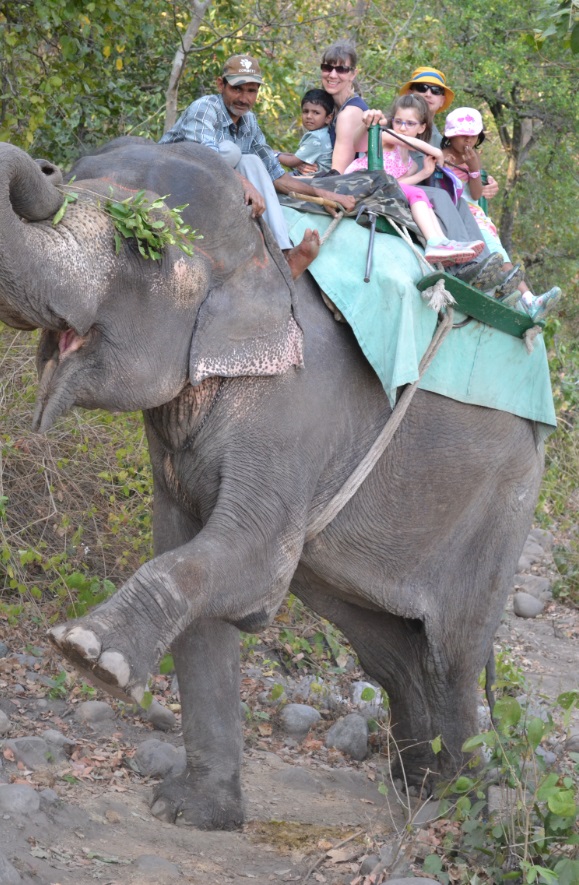 Here’s a picture of us with one of our drivers, Mr. Singh.  We’ve had three drivers in Dehli, and all three of them have been brothers, so it’s been convenient to always refer to our driver as “Mr. Singh” regardless of which brother we happen to have. 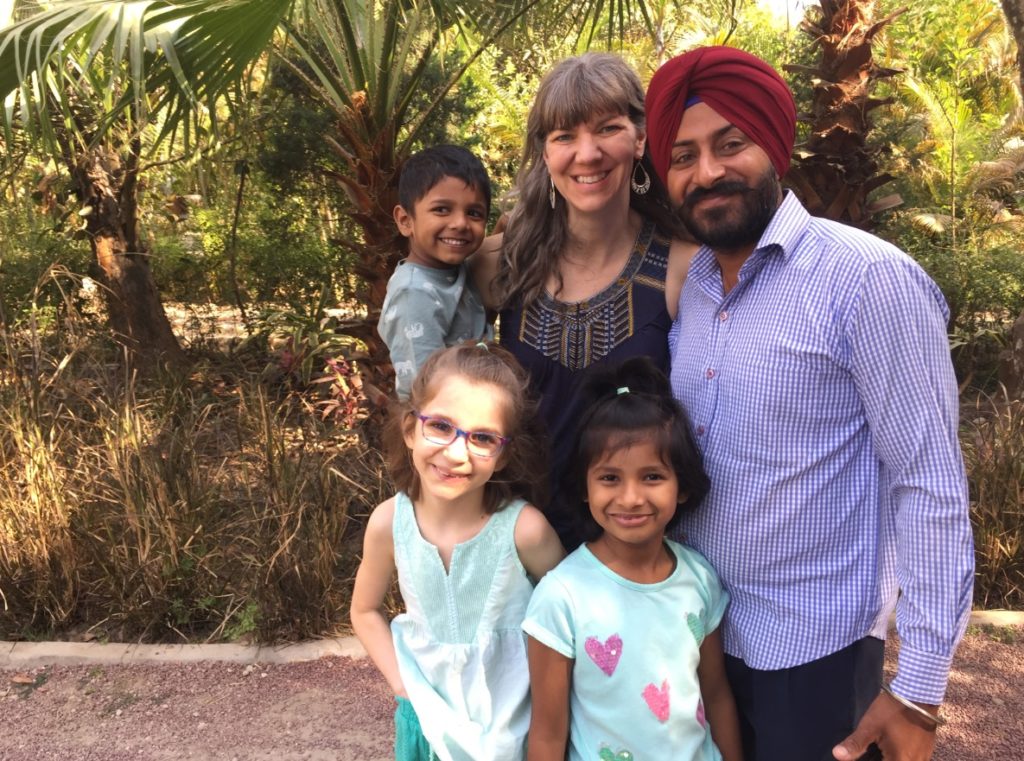 Another thing that Amy did that really impressed me was she brought some stuff to celebrate Easter.  Her mom, Rosemary, made little rabbits out of wash cloths.  The folded-up washcloth rabbits hold a plastic egg in them, and Amy filled the eggs with candy.  We introduced Easter to Shivani and Aashish just as a holiday that celebrates Jesus.  We’ve used Google Translate a handful of times to explain something and it’s worked great, but trying to use it to explain the resurrection of Christ in Marathi seemed like a bit of a stretch at this point, and I think would be an easy way to accidentally communicate something significantly in conflict with our actual beliefs.  So, we kept it generic. 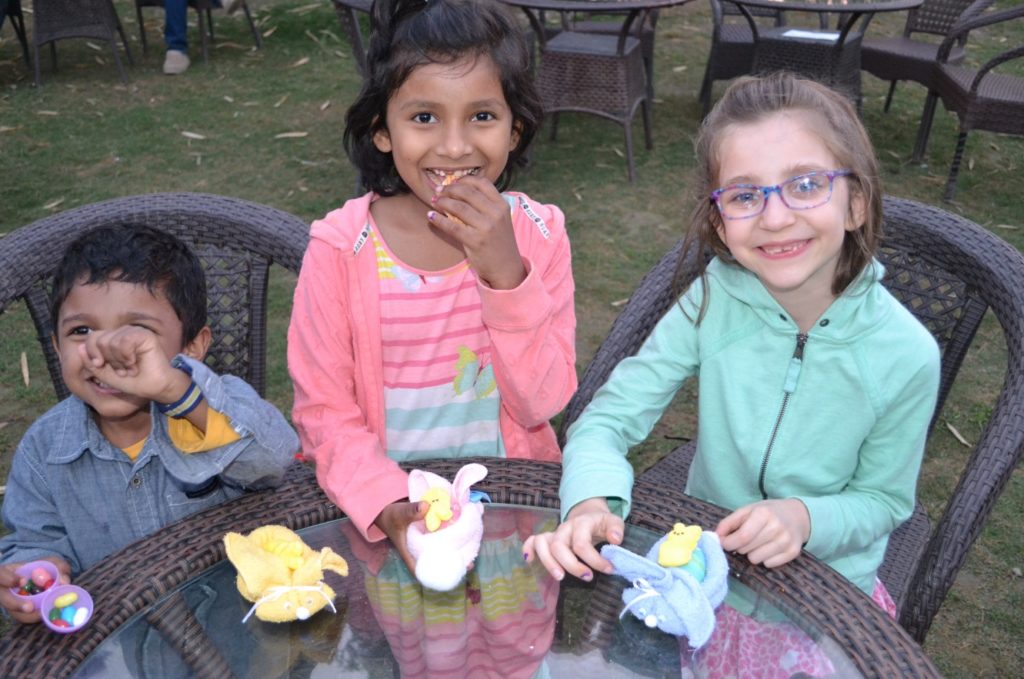 Why, yes, it IS difficult to get a good photo of all three kids at the same time.  Why do you ask?

Although the drive was to get to the national park area where we are staying was quite challenging, the resort we’re at is terrific.  Comfortable beds, A/C, cable TV so we can keep the kids still while putting on sunscreen or just so Amy and I can have a short break (all three of them especially enjoy watching Paw Patrol and Shimmer & Shine), hot running water, beautiful grounds, the pool, and a delicious Indian food buffet for every meal, with heavenly buttered naan hot off the grill.  Near our room there’s a little pond that has a bunch of frogs in it.  In the afternoon they sit on lily pads sunning themselves.  We initially just watched the frogs, but frogs don’t actually move very much, especially in the heat of the afternoon.  One of the kids got a big leaf and used it to gently encourage a frog to hop off the lily pad, and from there it pretty quickly descended into a game of just looking for frogs and then poking them with sticks.  To be clear, no frogs have been injured in this endeavor; I’ve always made sure the kids were poking gently.  Unfortunately it doesn’t take long to encourage a few dozen frogs to jump off their lily pads, but eventually they do come back.  This has allowed us to have multiple frog-poking sessions each day, which has been great. 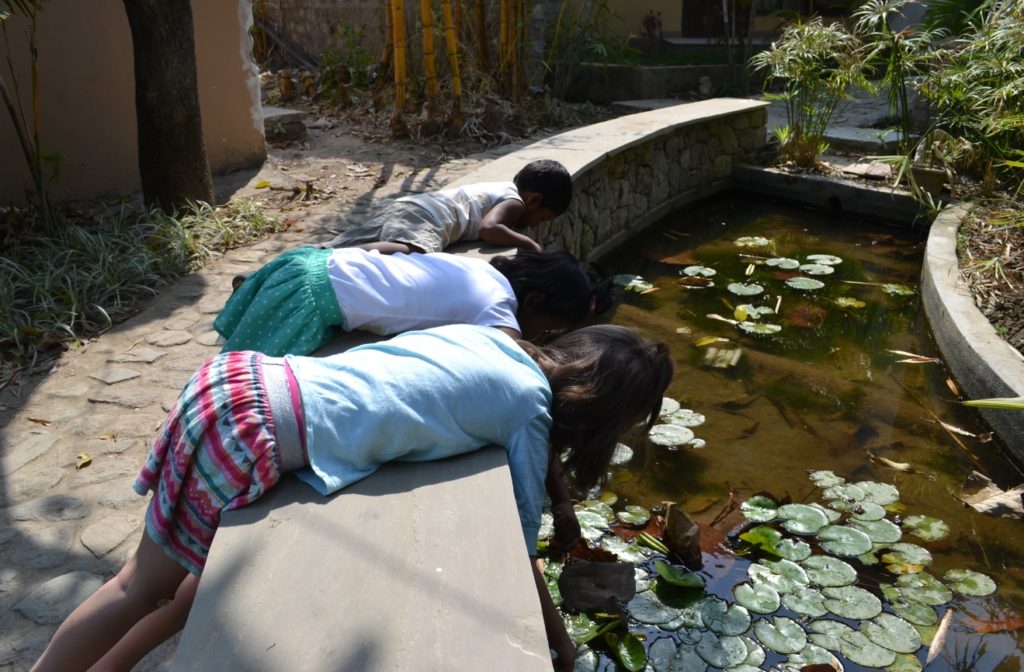 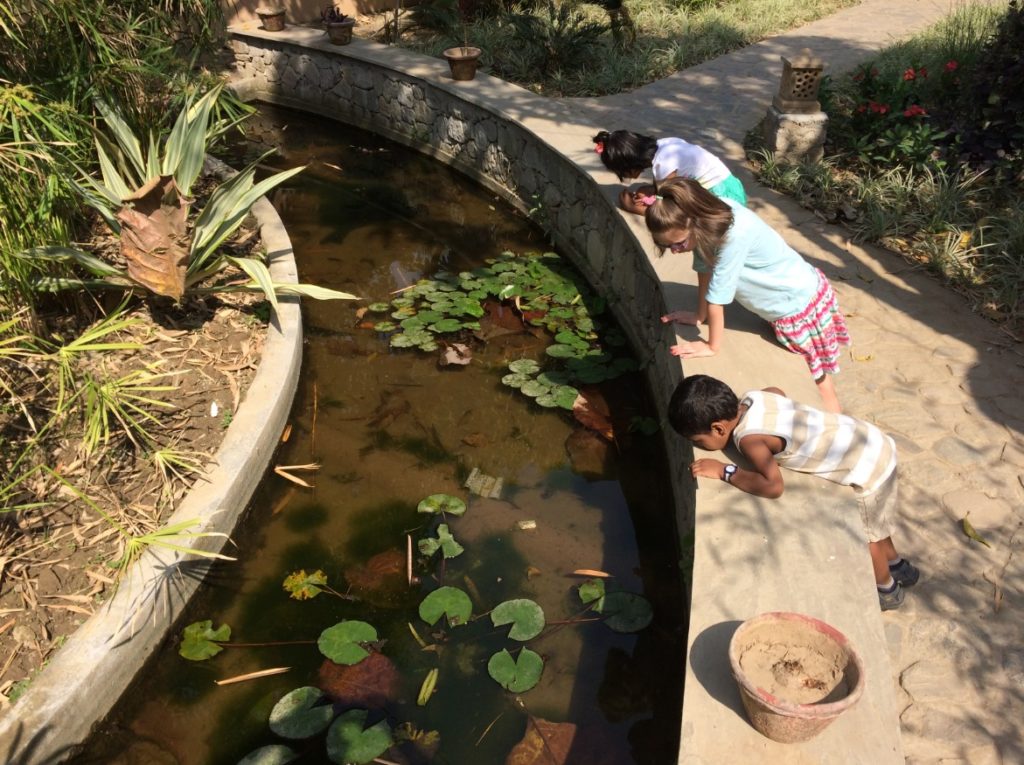 Tomorrow we leave early to drive back to Delhi.  Earlier today I got confirmation from the US Embassy that the visas for Shivani and Aashish are ready!  This is the second to last piece of paperwork needed.  We’re going to leave early to hopefully avoid some traffic and get back to Delhi in time to pick up the visas and also return to the FRRO office to wrap up the very very for real and for true last piece of paperwork that is required to bring Shivani and Aashish home.  If all goes as planned, everything will be wrapped up before dinner tomorrow and we’ll be able to enjoy our final day in Delhi on Wednesday just being together as a family in a country we all love.  And if everything doesn’t go as planned, at least we have a minivan …

2 thoughts on “My wife has regained her “certified genius” status”