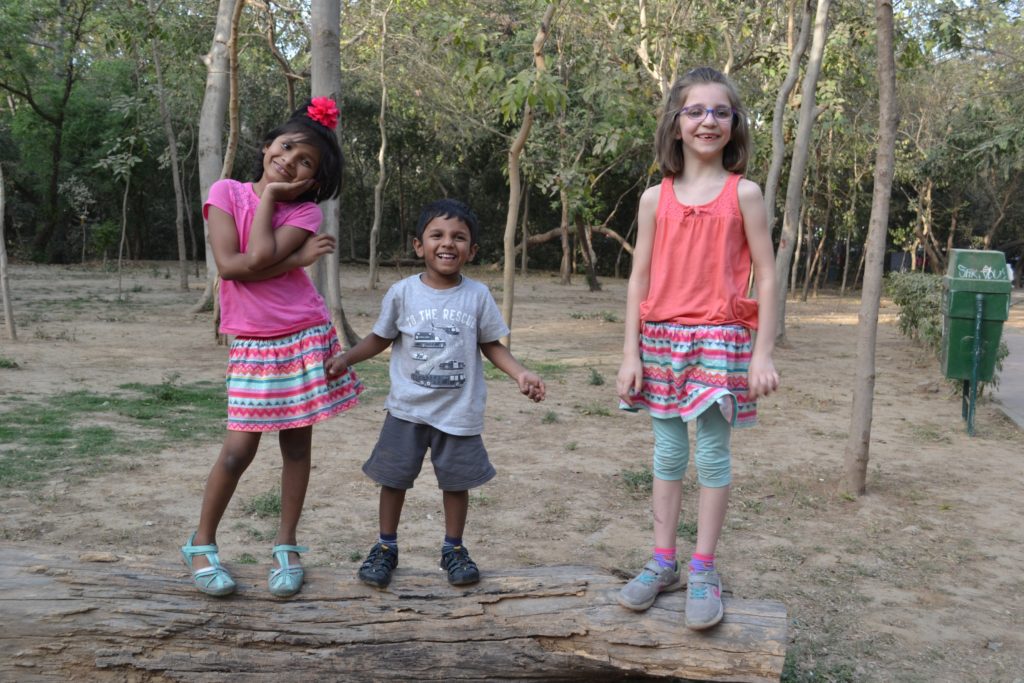 The last two days have been full of family outings – some for post-adoption logistics and some just for fun.  Yesterday we had medical appointments for Shivani and Aashish.  They’ve been very well cared for both physically and emotionally in their Indian home, and we have many detailed medical reports confirming their excellent health care, but the US government requires a separate medical exam/review for all children being adopted in order to be eligible for a US visa.  This exam includes a tuberculosis test.  Both Shivani and Aashish have been tested for TB three different times in the last two years and they’ve always been negative, but they were required to be tested again yesterday.  This test involves a small injection beneath the skin on the lower part of the arm, and returning 48-72 hours later to verify that you do not have a positive skin reaction.  Both kids took the poke like a champ, and barely winced, let alone cried.  I was impressed.

At this point there’s literally nothing that can proceed with our post-adoption paperwork until the TB tests have been confirmed negative tomorrow, so today we went to two different parks.  The first had at least five different playground areas, which was great.  When they tired of one set of playground activities we could simply walk 50 yards to the next one.  They all play together well on typical playground equipment, so while Amy and I supervise and stay engaged, we don’t need to chase Trouble Monkey around to make sure he’s not making trouble.  Here’s a picture of Shivani and Aashish very pleased with themselves after successfully climbing to the very top of a playground structure.  Notice also that Shivani lost another tooth last night! 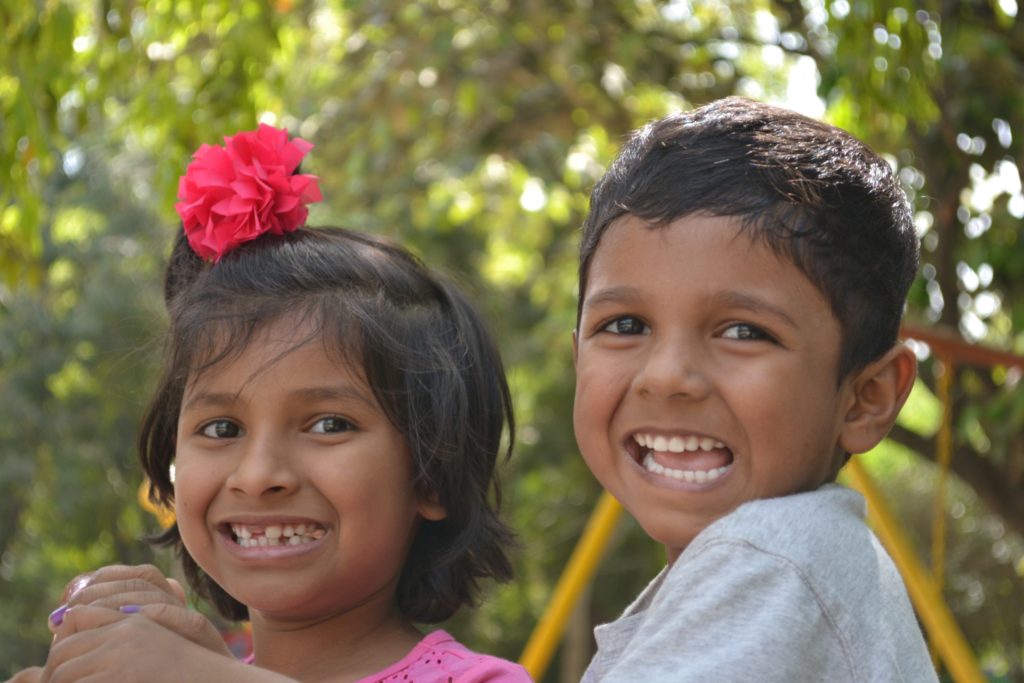 The second park was called “Deer Park,” and it had deer and peacocks in enclosures and also monkeys just hanging out around the park.  The biggest attraction, however, was a stray mother dog and her two puppies.  Shivani screamed with delight and asked if we could take one home! 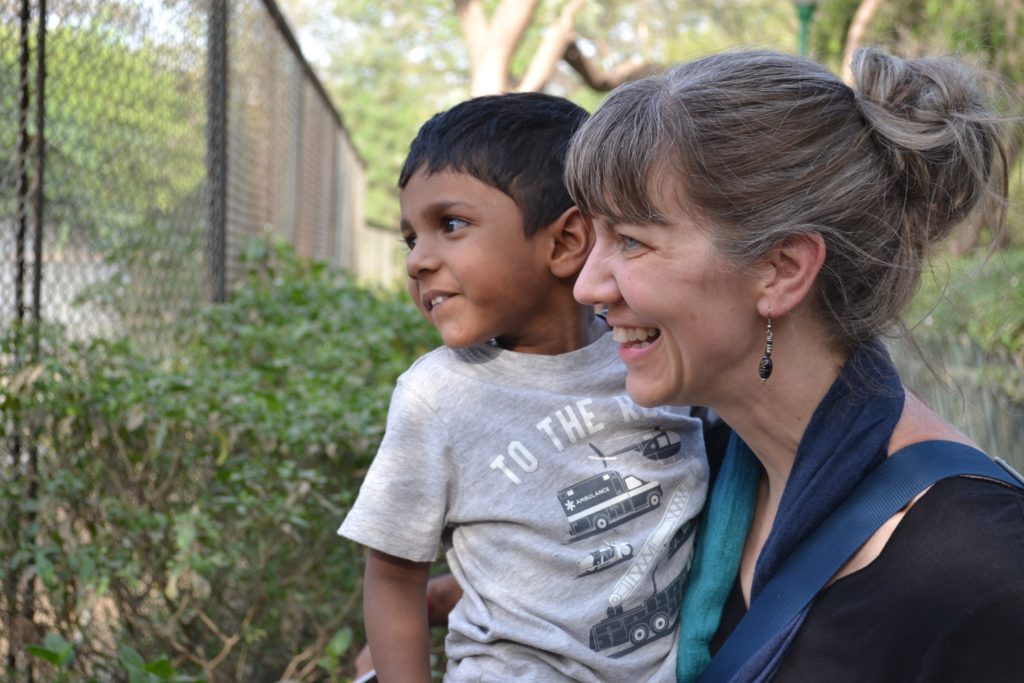 Latest Trouble Monkey antics:  yesterday he pulled pretty heavy book shelf over on himself.  Fortunately he walked away with nothing but a confused look on his face and one hand rubbing his head.  Yesterday I also got an iPad game called Itsy-Bitsy Spider for him.  He likes to poke things and see what happens, and this app is kind of just an open universe where you touch the spider and watch it climb the water spout, then on the roof you poke the squirrel and watch him get a nut, then you poke the cloud and watch it rain, etc.  I thought he’d love it and it would keep him entertained, but I’d check on him every couple minutes and need to get the app back for him.  He didn’t care – he just liked pushing buttons.  Once when I came back he had Norah Jones playing.  The next time, he’d called one of my clients (at like 2 am US time, of course, and I didn’t know that my contacts had somehow been synced to that iPad).  Then the next time, the iPad was broken.  I have no idea what he did, but the display doesn’t work.  Awesome.  It’s not like we had planned on using the iPad to help entertain our kids during our 20+ hour plane ride back home next week … 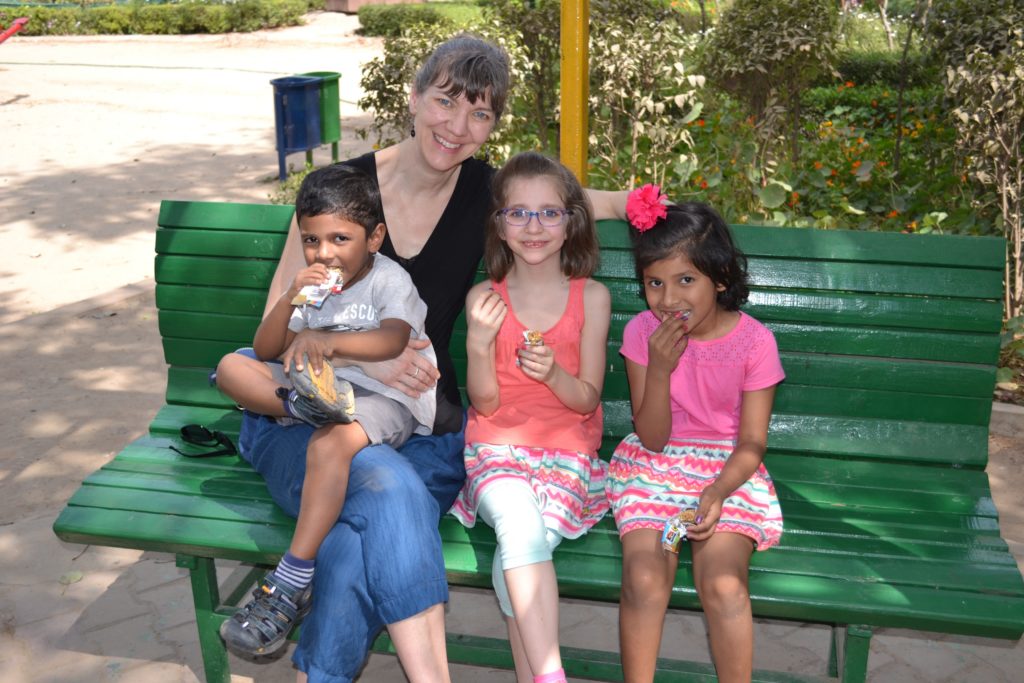 One additional commentary on attachment in our family is that it’s become very clear that both Shivani and Aashish want to be with mom.  They’re certainly not ignoring me, and I probably have more involvement with Aashish than Amy at this point, but there’s definitely something special about mom’s attention.  From an attachment standpoint this is good sign.  It’s very normal for an adopted child to attach primarily to one parent initially, sometimes even rejecting the other parent for a while, so it’s great that they both seem to have an affinity towards wanting to be close to Amy (since she’ll be spending more time with them than me once we get home), and that they’re not rejecting me in the process.  The one complicating factor in this is that collectively my children have three butts and six hands, whereas my wife (thankfully) only has one lap and two hands.  Now, I’m no math whiz, but there seems to be an imbalance here, and as a result there has definitely been some jockeying for position between all three kids in terms of who gets mom’s lap/hand/attention/etc.  To be clear, this is a very good problem to have, and we do not for a moment wish it was any other way.  But yes, both Shivani and Zinnia have been in tears when they’ve been out-maneuvered and don’t get to sit next to mom in the car or at the dinner table.