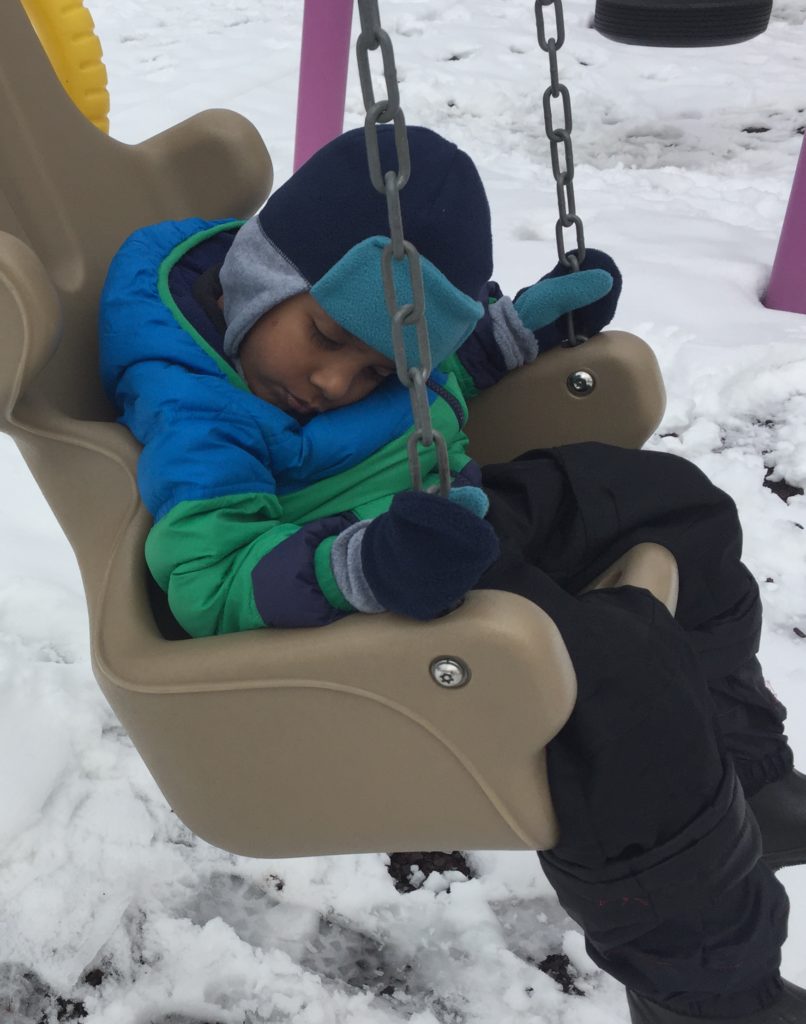 Astute readers will note that I am posting this in the middle of the night.  That’s because I went to bed at 7:00 pm with my kids, and woke up at midnight.  After laying in bed for 2.5 hours I decided to get up and do something productive.  If I didn’t have two new kids I’d overcome jet lag by knocking myself out with sleeping pills for a few nights, but if they need me in the middle of the night and I’m groggy and half awake that’s not so good in terms of reassuring them that Amy and I are their providers.  So, I’m awake.

Before we left India I told Amy that if we simply made it home alive with all three of our children in tow, I’d consider that a victory.  The kids actually did really well on our two, back-to-back 8+ hour flights from Delhi to Minneapolis (many thanks to the person who invented in-flight cartoons), and we arrived at the Minneapolis airport just before noon on Thursday.  We cleared immigration and customs in record time, and were greeted by four very excited grandparents.

In anticipation of the long flights and absurd middle-of-the-night departure time from Delhi, on our last day in India we took the kids to a US-style mall so they could eat pizza and run around.  We had hoped to run around outside, but it was almost 100 degrees out.  Amy and I decided we’d served our time in the Indian heat, and it was in our family’s best interest that mom and dad didn’t end irritated and exhausted from another day in the sun.  Hence, we patronized the utopia of commercialism and materialism known as “the mall.”  While we were at the kids play area at the mall, Amy, very graciously, offered to hold down the fort while I go find a beer.  I did find an Indian craft beer, and I sat all by myself in silence in an air conditioned restaurant and drank it.  The beer was very good, and the experience was glorious.  And once again, my wife is a genius for suggesting that I have some alone time before being confined in a tiny airplane seat for almost a full day with three active children. 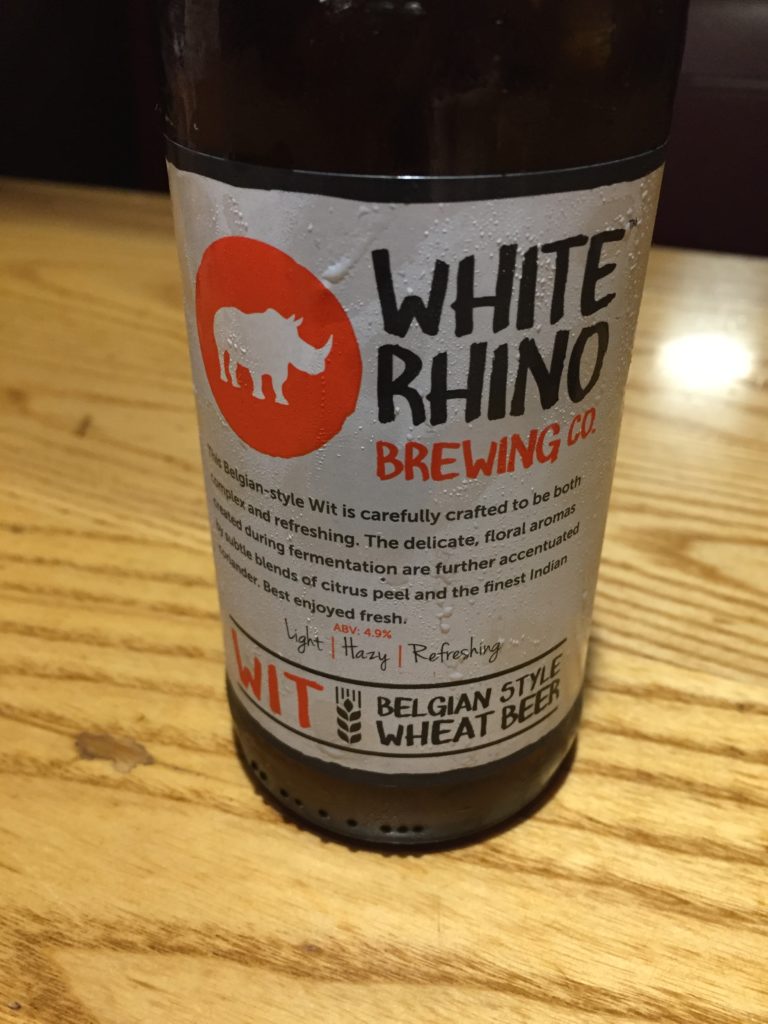 The rest of the time on our final day in Delhi was spent packing and playing with our kids in our rental apartment.  Amy bore the bulk of the work because I ended up with some sort of stomach illness, unfortunately, and spent most of the afternoon and evening either laying in bed or vomiting in the bathroom while she juggled packing, kids, and dinner.  Our flight left at 3:45 am on Thursday morning, so we slept only a few hours and then got up at 12:30 am to herd our kids downstairs to meet Mr. Singh.  This is how I found Aashish when I went to wake him up: 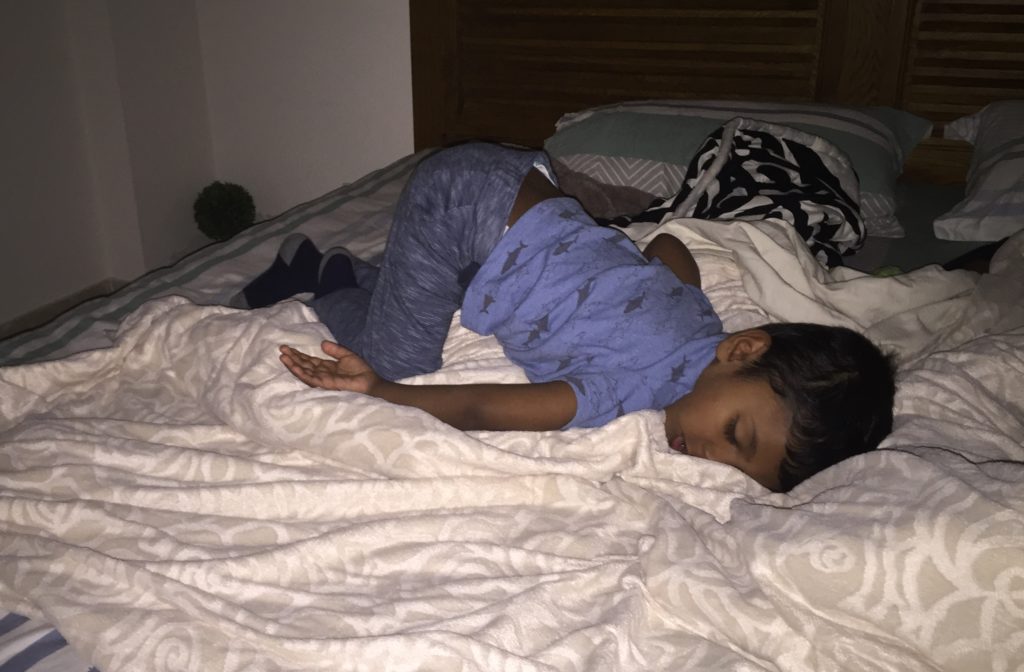 Interestingly, our driver was yet another Mr. Singh.  We had four drivers all named Mr. Singh, all bearded, and all with Sikh turbans.  This particular Mr. Singh had been driving for adoptive families for nearly 15 years!

All three kids did AMAZING on the journey home, considering that we got them out of bed in the middle of the night and then drug them through airports for the next 24 hours.  I don’t think we had any kids in tears the entire time.  On our second flight we were able to get two seats for Zinnia to sleep in and two seats for Shivani to sleep in, so at one point we had all three kids sleeping simultaneously.  Here are my adorable sleeping children: 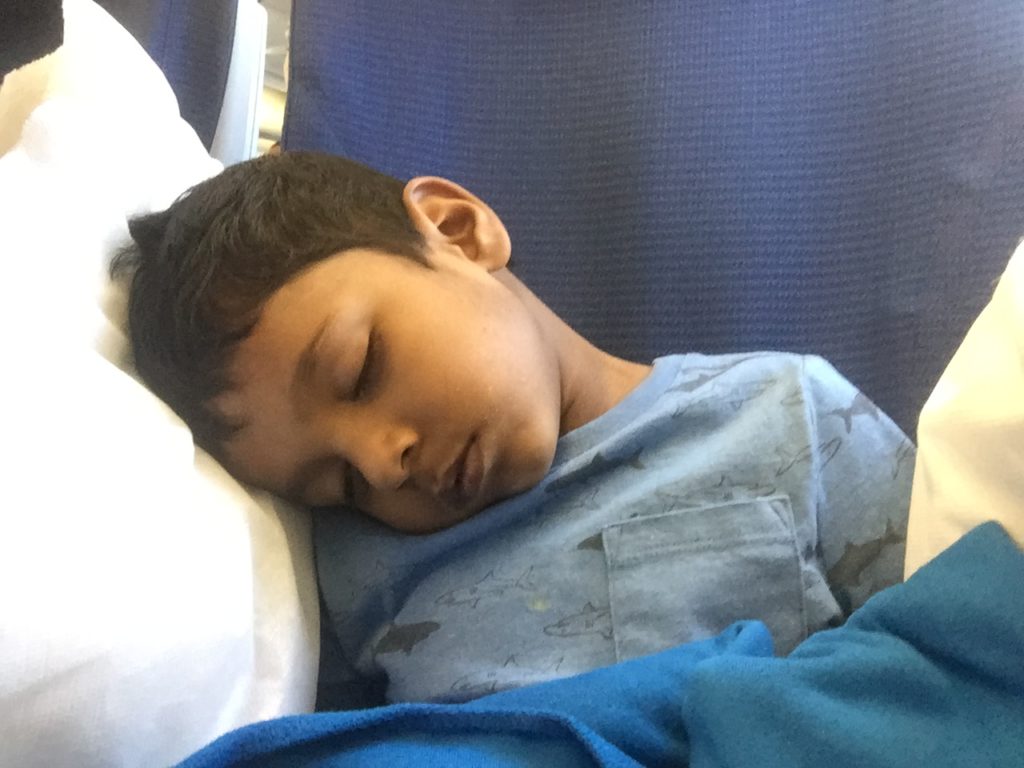 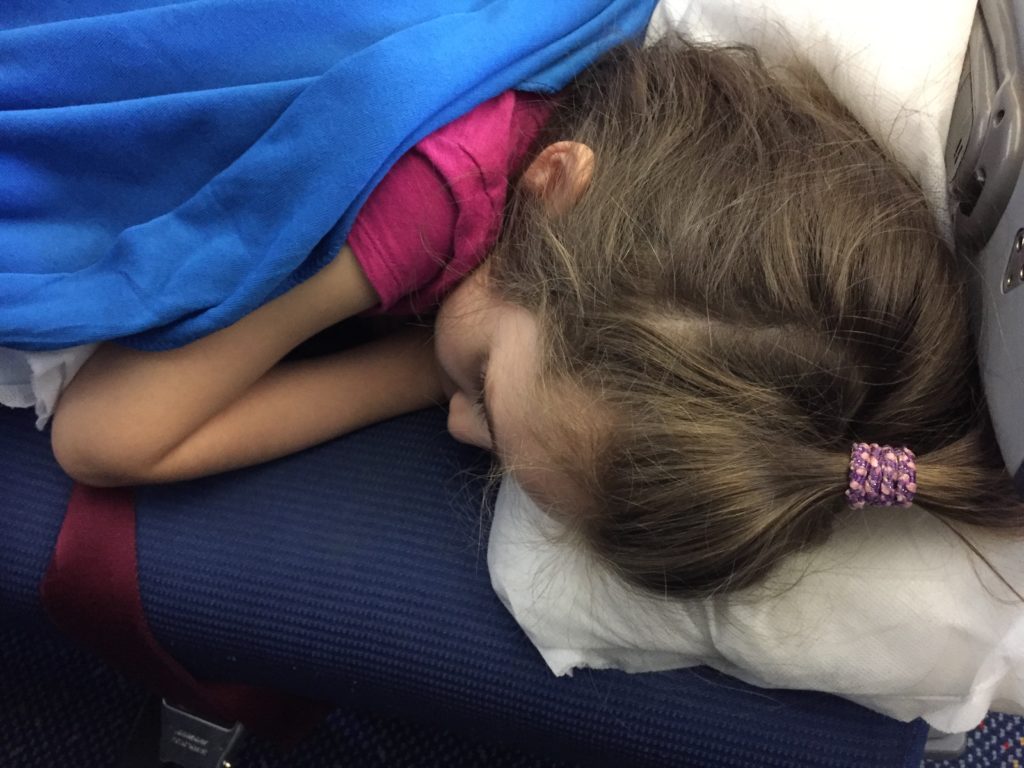 Shivani IS in that last picture, I promise.

Upon arriving home, the first thing we did was have an impromptu snowball fight!  Shivani and Aashish caught on quickly and there were lots of smiles and laughter as we chased each other around the front yard.  And in case anyone is keeping score at home, Dad was definitely the target of the most snowballs.  Then we gave the kids a tour of the house, and bundled them up and sent them outside again.  Amy did some unpacking while I took them to the park by our house. 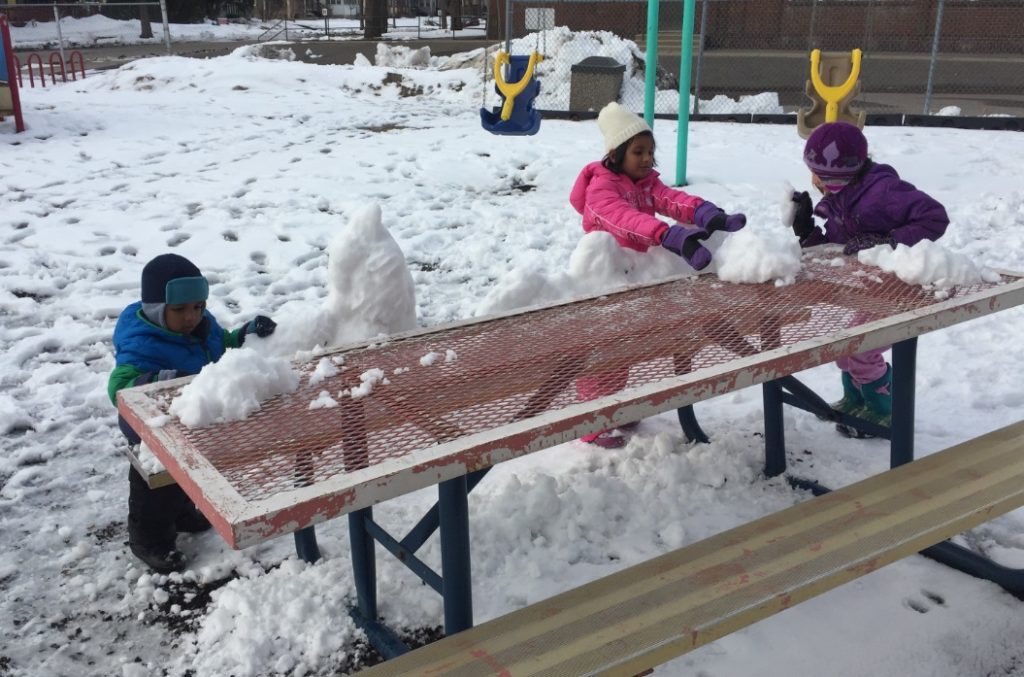 It was fascinating to watch Shivani and Aashish wear boots, put on mittens, and interact with snow for the first time, and the time at the park flew by.  When Aashish finally fell asleep in the swing, I figured it was time to head home and work on getting the kids to bed.

Friday morning the kids were up at 4:30 am, and the whole day was essentially a whirlwind of unpacking and playing with kids.  Because we’re crazy brilliant, we decided that since the kids had fun outside on Thursday afternoon when it was in the low 30s and sunny, we should bundle everyone up and take them to Minnehaha Falls when it was in the low 20s and windy.  Shivani – justifiably – wore the furious scowl seen below pretty much the entire time, and when we finally got back to the car everyone was a wee bit grouchy.  Amy made it all good again, however, by making hot chocolate with marshmallows for the kids when we got home, and demonstrating that sugar makes everything right in the world as far as young kids are concerned. 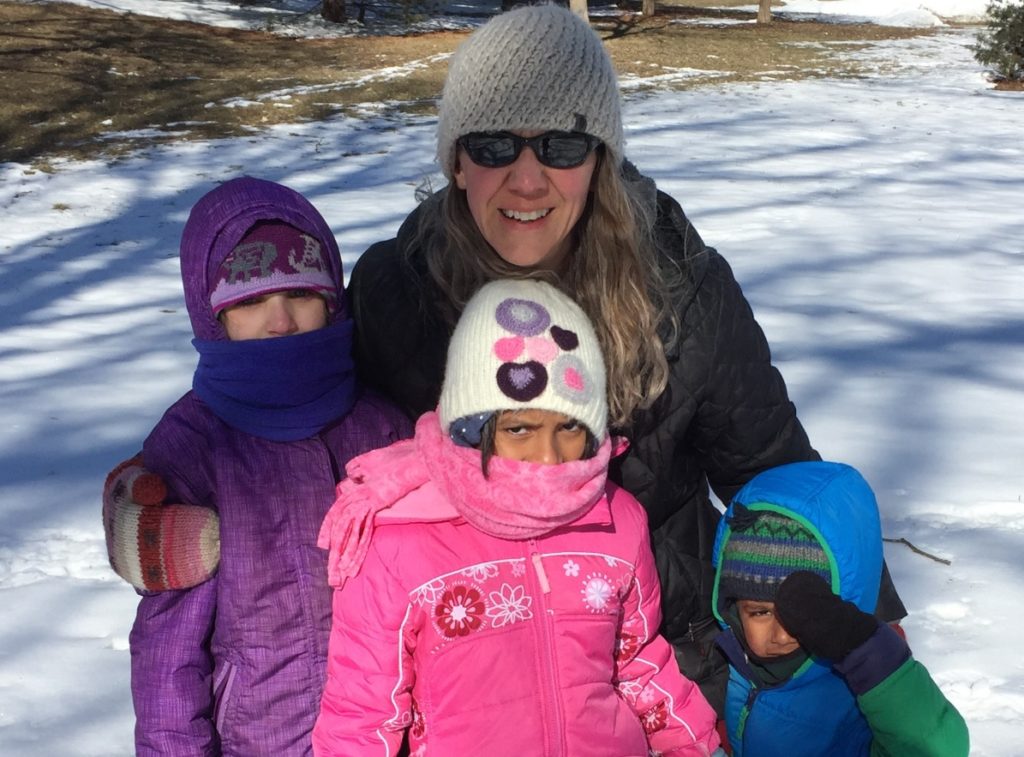 Today they slept until almost 5:30 am, so we’re moving in the right direction.

On Monday Zinnia goes back to Kindergarten, and I go back to work.  I did very little professional work the last week before we left because we were working so hard to get everything ready to go, and so I have essentially been away from work for a month.  That’s a loooong time.  It’s going to be strange trying to get back into my old routines with two more kids involved.  Amy has taken a year-long leave from her position at Minnehaha Academy in order to provide extra support for our family during this next year of transition, so she won’t be going back to work yet.  When Monday rolls around and I head to the office, she’ll drop Zinnia off at school and then have Shivani and Aashish at home the whole day.

It’s awesome for our family that she’s willing and able to stay home with our children until fall, but it’s a lot to manage.  I would be pretty nervous, to be honest, if next week meant me caring for our kids mostly on my own instead of just going back to work.  The dishwasher fills up a lot faster than it used to, the laundry piles up faster, and the house gets messier faster too.  We decided after lunch today that we we’re just going to take Aashish’s shirt off when he eats, because he gets a bunch of food on it at every meal.  Today I cleaned yogurt out of his hair and spaghetti sauce off the bridge of his nose, if that gives you any indication as to his boyish exuberance at the dining room table.  Yesterday alone three shirts and a pair of pajamas went down the laundry chute.

Shivani and Aashish are truly wonderful children who we already love like crazy, but it’s harder to parent and care for kids when you don’t speak the same language well and they are new to your family, new to your house, new to your routines, new to winter weather, and new to your culture.  If any of you feel so inclined as to send a care package to Amy with dark chocolate or homemade cookies like your mom used to send you when you were in college, I have a feeling she’ll be needing them!

14 thoughts on “Home, with the snow and jet lag to go with it”