Hi everyone!  We’ve been fine and things overall are going very well, we just have been unable to get cell phone signals or WiFi for the past couple days, hence my radio silence.  So, to catch you up on the last few days … 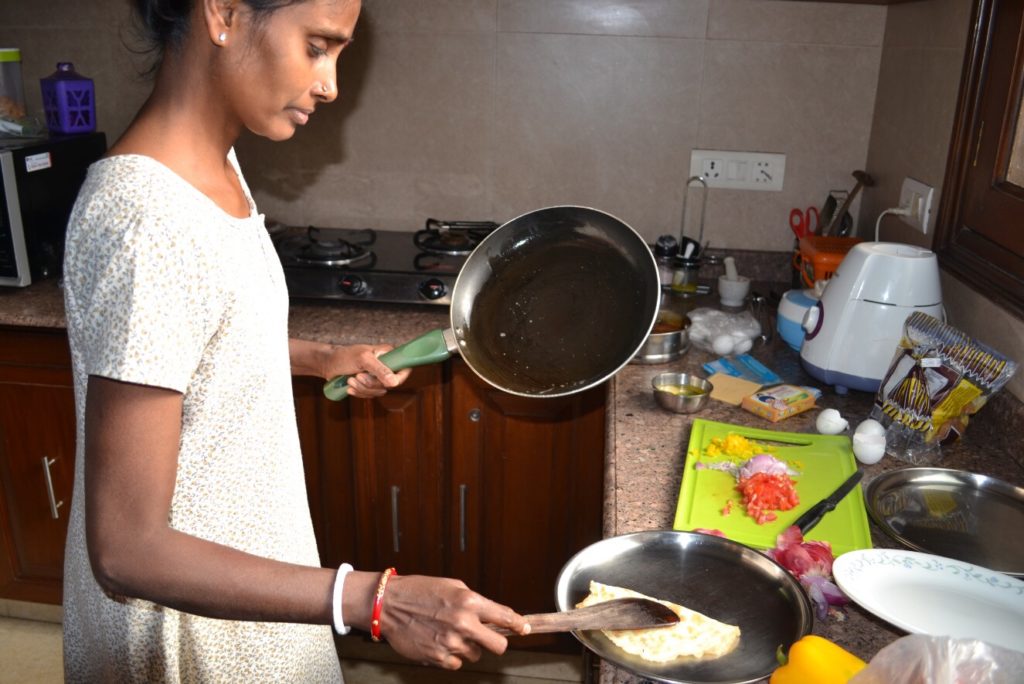 One of the blessings of our stay in Dehli has been Kajil, a local woman who is employed to cook, clean, and do the laundry for our Airbnb host couple, and who we were able to employ in their absence.  We do need to shop for all the groceries, which isn’t easy – it took Amy and our driver stops at five different markets miles apart from one another to find all our basic food staples like milk, eggs, and produce.  Once we have the groceries, we use Google translate (amazing!) to explain to Kajil in Hindi what we would like to eat, and she cooks for us AND cleans everything up for a fee of about $5 per meal.  She also washed, dried (on the rooftop patio clothesline) and ironed laundry for us twice this past week for an additional $2 per load.

This has been without a doubt the best per service dollar we’ve ever invested in, and Amy and I have joked repeatedly about attempting to get a work visa for Kajil to also return to the US with us.  Yesterday morning I asked her to make me an omelet with vegetables and cheese and a little bit of Indian spice for breakfast, and it was fabulous.

In our adoption education training, much of what we learned related to the many challenges that adopted children face as they are grieving many losses from leaving their previous families/homes/cultures/caregivers/friends/communities and developing a healthy attachment to their forever family.  Adoption agencies are very intentional about helping adoptive families to be well-prepared for the many difficulties that may be encountered and also assist with having access to the knowledge and resources needed to best support the transition for their adopted children. 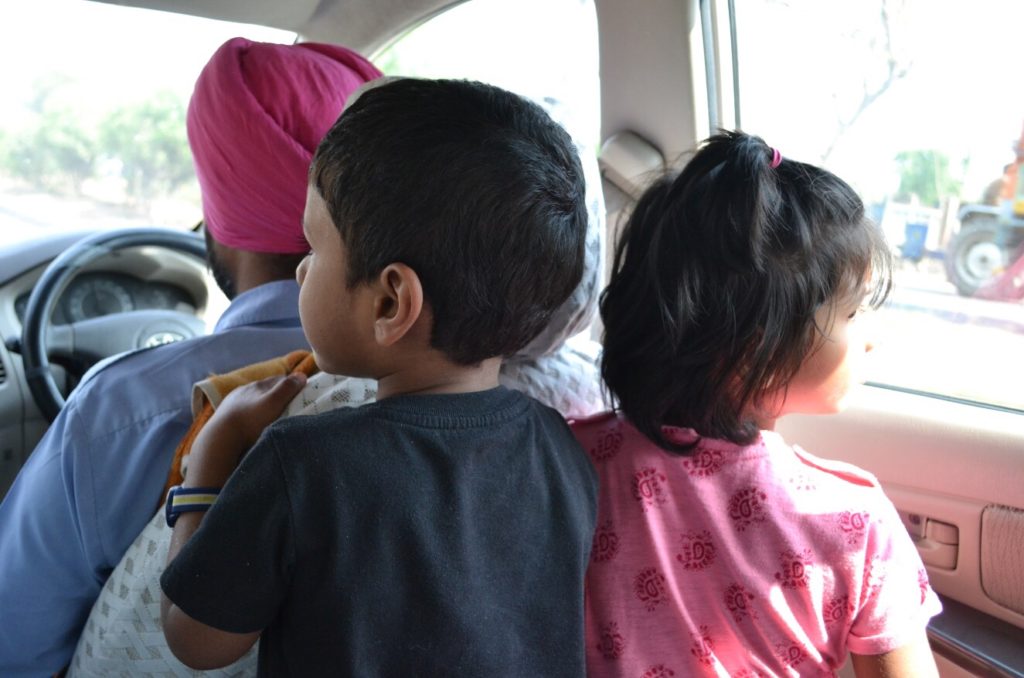 Shivani and Aashish, blessedly, have experienced very few of the common transition challenges – at least so far, it seems.  Aashish is hyperactive at times, but he doesn’t seem to be any more active or prone to mischief than most other boys his age.  His previous caregivers also mentioned to us more than once that he has a mischievous personality, so it seems his tendency to “get into everything” within reach is par for the course for him.  Shivani has expressed anger or frustration several times a day, usually when we tell her no to something that she wants, such as using my phone or having potato chips for breakfast.  She expresses herself by pouting, scowling, or whining, but this also doesn’t seem particularly uncommon for a girl her age who is testing out boundaries with parents, and she is usually able to move on within 15 minutes.  Also, as anticipated Shivani and Zinnia have had some turf battles that have left one or more of them in tears, but not beyond what I would expect with any two kids who are both accustomed to being the oldest/only child and suddenly asked to share both their status and parental attention.  Frankly, if we had three biological children these ages and we took them on a long-distance trip for a couple of weeks to places they’d never been before, I would expect to see many of these same behaviors.

The way the timing of our travels and appointments worked out, and taking into account all the different days when the various government offices would be closed for Easter weekend, we ended up with a four-day weekend in which we essentially cannot do anything related to our adoption proceedings.  As such, we decided to take our first family vacation and go to one of the national parks in India where elephants and tigers still live in the wild.  To be honest, this was all Amy’s idea.  I was hesitant, but agreed to fully support it as if it was my own idea.  Spoiler alert:  Amy and I have agreed that if either of us ever again suggest attempting a fun, relaxing, low-key mini family vacation which requires a substantial road trip in a developing country while our children are under the age of 10, the other person should lovingly smack some sense into them.  Amy and I are all for having authentic and adventurous cross-cultural experiences but managing the needs of three young children while on this latest excursion has been a little much at times.  As such, I have reluctantly downgraded my wife’s “genius” status from “certified genius” to “apprentice genius.”  Here are some pictures from the drive: 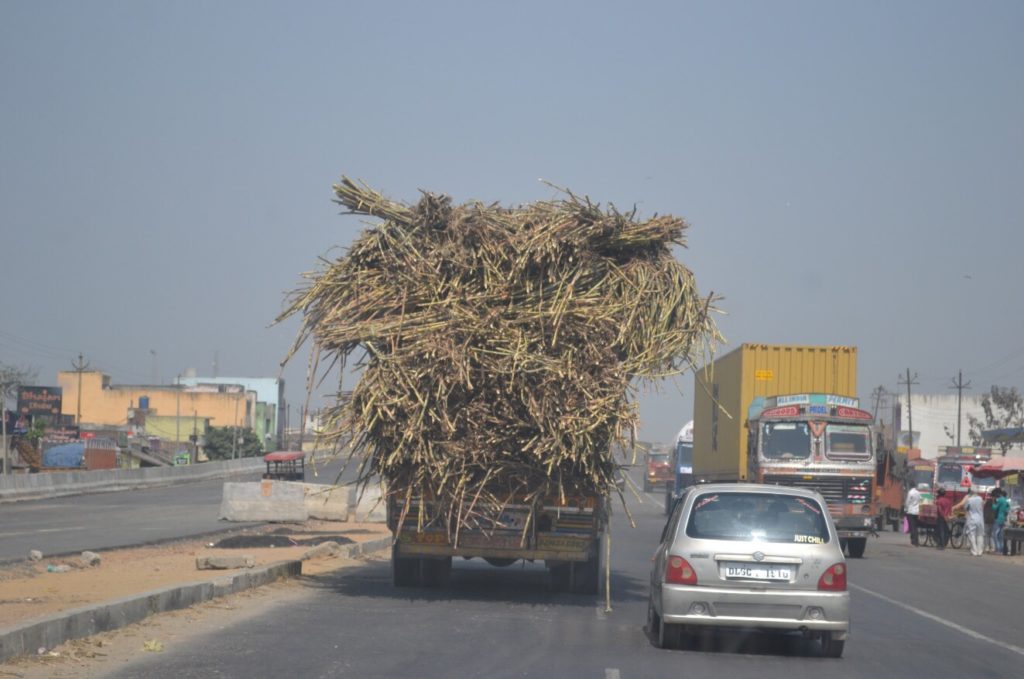 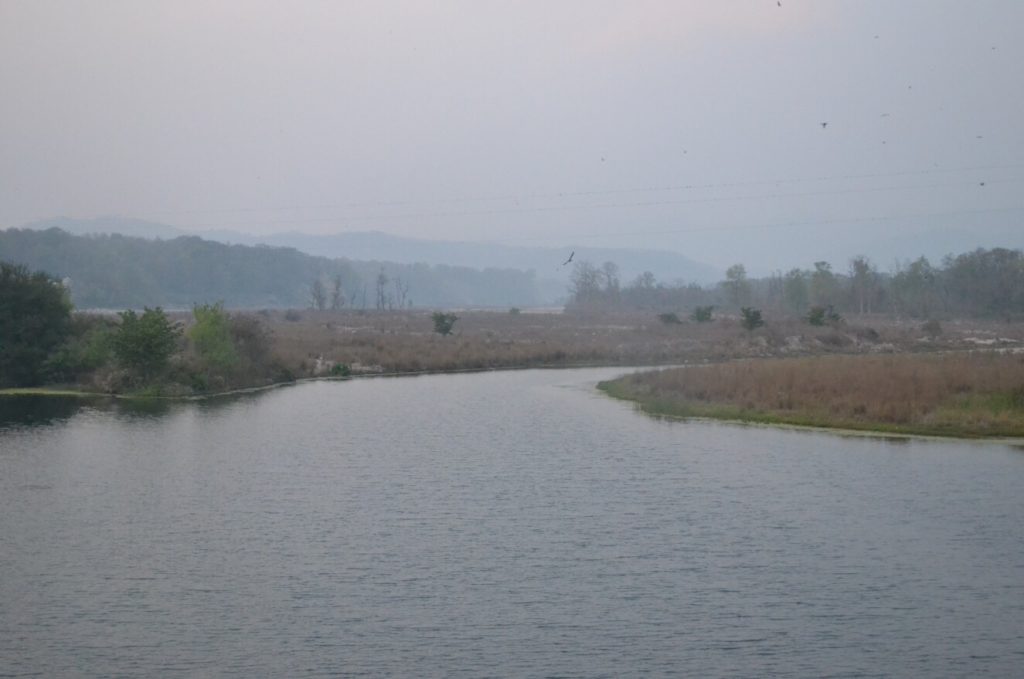 Google said our road trip to the national park was just under 5 hours.  We debated taking our newly acquainted family on that long of a car ride, but in the end decided that we’d go for it since we Amy had the foresight to pack everything from iPads to Swedish Fish in our luggage.  Welp, Google lied to me for the first time in my life, because it took 9 long hours – half of it in congested stop and go traffic, swerving around street vendors, rickshaws, and huge trucks, and the other half of it on rural roads swerving around potholes and oxen carts.  In fairness to Google, the actual drive time was closer to 8 hours.  We had one stop where our driver just left us in the car on the side of the road in a rural area with the hazard lights on for 20 minutes while he went and did something related to purchasing some sort of permit for entering another state.  We never did figure out exactly what that was all about.  We also lost probably another 45 minutes when we missed a turn.  I was watching closely (during anytime I wasn’t dozing peacefully in the front seat) and I never saw anything that looked like a street sign or highway marker, so I am impressed that Indians can navigate from place to place.  I would be totally lost.  In the end we didn’t get to our resort until after 7 and both girls were feeling carsick.  With the chaos of trying to get an extra mattress for Aashish to sleep on next to the pull out couch for the girls, and sheets and a blanket to go with it, and pillows for the kids, and pillow covers to go with them, the kids didn’t get to sleep until after 8:00.  Things were a wee bit tense by the time they all were in bed.  HOWEVER … we verified that there is a swimming pool on site with swimmable water in it, so we’re looking forward to finally being able to take the kids swimming tomorrow.

One very good thing in this adventure, however, was that we were able to get a bigger vehicle.  So far, we’ve been driven around in a little sedan.  At the roomiest, we have one adult in front with our overstuffed backpack and the other four in the back.  For the times when our local adoption guide is with us, then he sits in front and we have the whole family crammed in the back seat.  We’ve ridden that way for as long as 45 minutes in 100 degree heat, and that’s about 40 minutes longer than is comfortable.  After we’d arranged transportation to the national park, we learned that our driver was planning on us going in his itty-bitty sedan like what we’ve been riding in.  We opted to be a little high maintenance by insisting on a bigger vehicle, and in the end we got a minivan!  With, like, a seat for each person!  We had to pay more for it, but Amy and I agreed that had we attempted this trip in the itty-bitty sedan at least one member of our family would likely have long-term road-trip PTSD.

Oh, and by the way, this is how our minivan driver uses his seat belt: 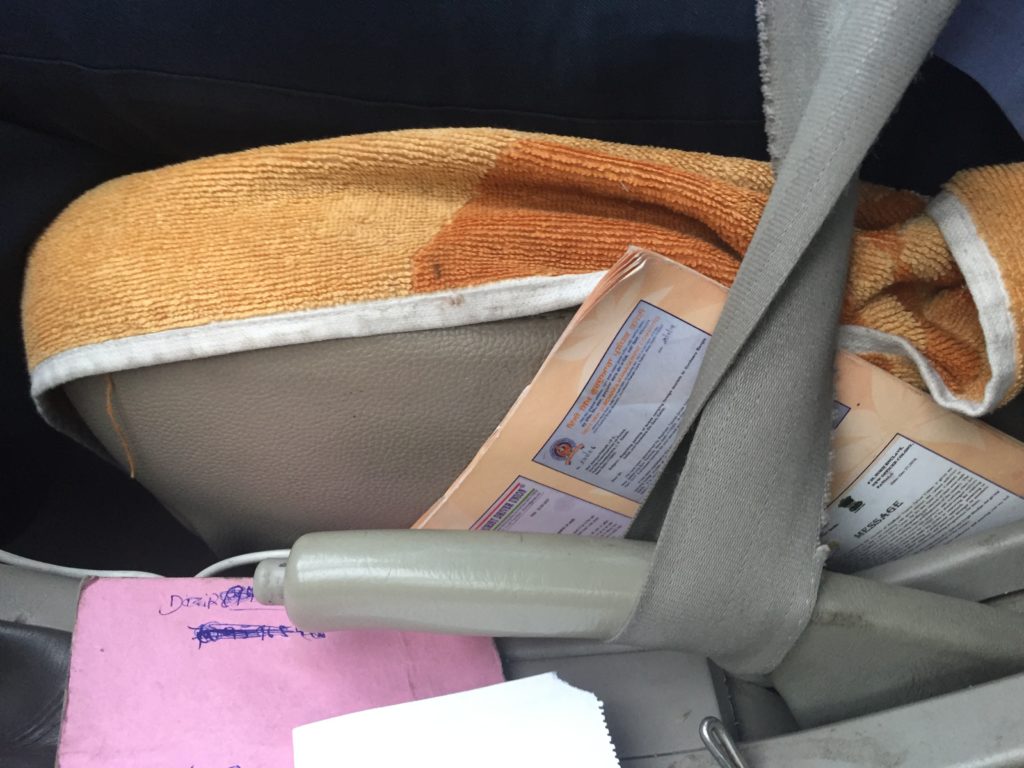 The seatbelt did work properly, so I have no idea why he uses it this way.  Repeat after me: “not wrong, just different.”

Another really great thing about this drive was that, while all three kids had their struggles at times, they were usually rotating who needed extra help from mom or dad.  That meant that we often had one kid who out of sorts for anything from needing to go to the bathroom, to being upset that a sibling was taking up more than their fair share of the snacks, seat space, or time on mom’s lap, but we rarely had more than one kid struggling at a time.  Amy was amazing in dealing with all three of them.  I sat in the front, dozed a good chunk of the time, and engaged in parenting when she asked for backup.  It wasn’t that I wasn’t willing to help more, or to let her have a turn in the front, but we both agreed that if she was in the front we’d wind up with her needing to do much of the same parenting from the front seat anyway, so she graciously let me ride in front the entire time.

SO … tonight we are staying near Jim Corbett National Park.  Our only plans so far are to go swimming and make sure kids take a nap – since the restaurant on site doesn’t start serving dinner until 8 pm and there isn’t a McDonald’s within about 100 miles – and at this point that’s enough planning for me.

6 thoughts on “My wife is no longer a certified genius”