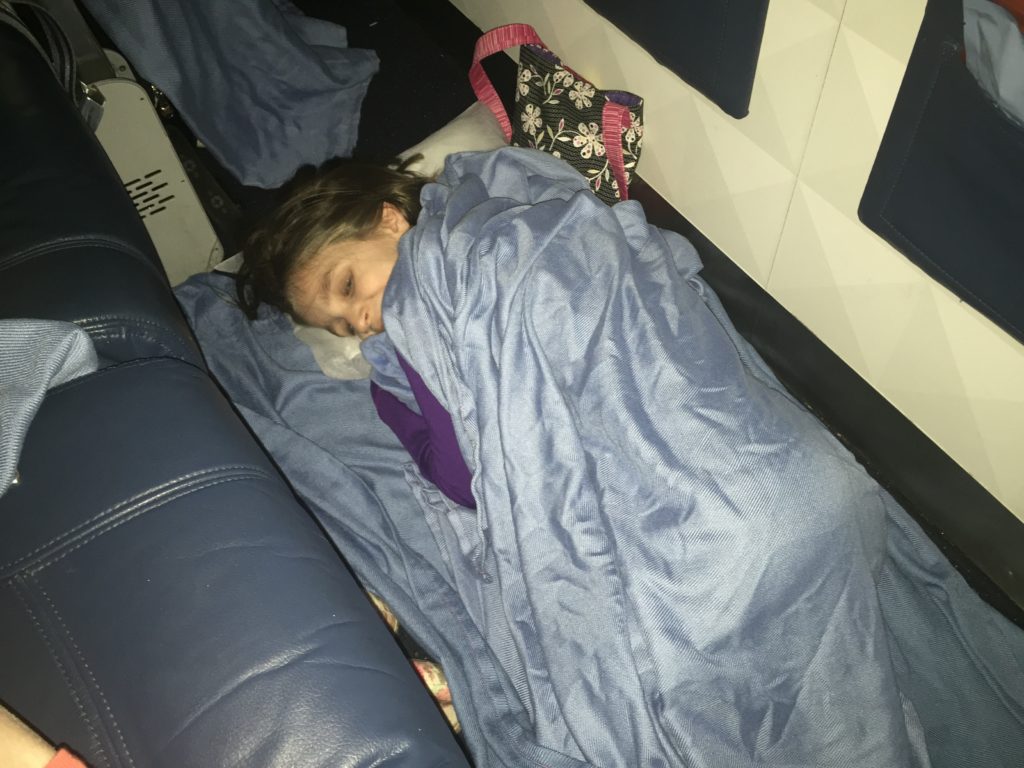 One of the most memorable things I read in seminary (graduate level pastor school) was a quote from a bishop who lived about 1500 years ago.  He wrote that “the coincidences happen more often when I pray.”

Both Amy and I have had a lot of meaningful encounters with God over the years, but I’ll be the first to admit that there’s no single thing I’ve experienced that a determined atheist couldn’t explain away.  However, I take a lot of comfort in having had seen over the years that, at least anecdotally, prayer changes things for the better in my life.  There have been two such things that have happened since we left on Friday afternoon.  First, initially our seats for our first flight were in the very back of the plane, in the center section next to the bathrooms.  Amy really didn’t want to sit there if possible, so she talked to the gate agent and although he said there weren’t any other seats available on the flight where he could seat all 3 of us together, he somehow managed to reassign us as boarding began.  When we boarded the plane we discovered that our new seats were right behind the bulkhead, which means that we had no seats in front of us and a greater-than-average amount of floor space.  We were quite pleased about that, as it meant that we could have Zinnia sleep on the floor rather than trying to have her sleep in an airplane seat.  I texted our parents to let them know of this development, and my mom’s immediate response was “your dad was praying that you would get those seats!”  Coincidence that we got those seats?  Doubt it.

The other experience we had was regarding hiring a driver for this first week in Pune.  Amy and I have contacts in Pune from two different organizations that we worked with when we were here in 2007, and once we had our travel dates we reached out to both of them to ask if they had recommendations for a reliable driver who spoke English well.  We got an enthusiastic recommendation from one of the organizations for a man named Moses, and hired him — and then we let the other organization know that we had found a driver so never followed up with them about who they might recommend.  When we first met Moses on Monday, we learned that BOTH organizations had reached out to him to ask about him being our driver for this week.  So, even though we had never asked the second organization about their recommendation — we later discovered that they would have recommended the exact same driver (even though the organizations are not working together and are not located in the same area of the city).  By the way, if any of you are keeping score at home, there are 5 million people in the Pune metro.  Coincidence that both organizations knew and reached out to the same driver in a city of 5 million people?  Not likely with those odds.

These types of “coincidences” are very encouraging and empowering to us.  Today Amy went with Moses to get our bank draft, and had a crazy (yet typical for India) experience in which Moses totally saved our bacon.  When we go pick up our kids in the morning we need to bring the orphanage the Indian equivalent of a cashier’s check for court-related fees.  This should be simple, right?  Go to a bank, give them a wad of cash, and walk out with a bank draft.  15 minutes – 30 tops if there’s a line.  As Zinnia would say “easy peasy lemon squeezy.”  Well, it took EIGHT trips to different banks to get it done  First of all, the bank draft needs to come from a “nationalized bank.”  I don’t know what that means, but there are less than 20 nationalized banks in India.  Then, working with that list, there were all sorts of problems.  Several banks couldn’t do it because the amount we needed the bank draft for was more than they would do for a cash exchange.  At several other banks they couldn’t do it because their servers were down.  And at another, they wouldn’t do it because Amy didn’t have an account with them.  What ended up happening is that Moses went and got his wife, had her deposit all the money into her account at a nationalized bank, and then had her get the bank draft.  This took nearly 5 hours, and I honestly don’t know what we would have done had Moses not went and got his wife and had her get the bank draft.  Now, the reason that Amy was willing to hand over a very large wad of cash to this man’s wife within minutes of meeting her and watch her walk into a bank with it was that Moses had come recommended by both of our contacts in Pune.  There’s no way she would have done that with a random driver we’d hired.

SO … as we approach tomorrow (we meet our kids in 10 hours, woah!), we do so with an air of confidence.  We have no illusion that everything will go perfectly and we won’t have any challenges – the eight bank trips is ample evidence of that.  However, we are both very confident that this whole thing was God’s idea, and we are equally confident that He will take care of our family through this journey.  And for those of you who have been praying for us – please keep it up!!

The next post will have a new Swanson family photo in it!

5 thoughts on “Prayer vs. Coincidence”