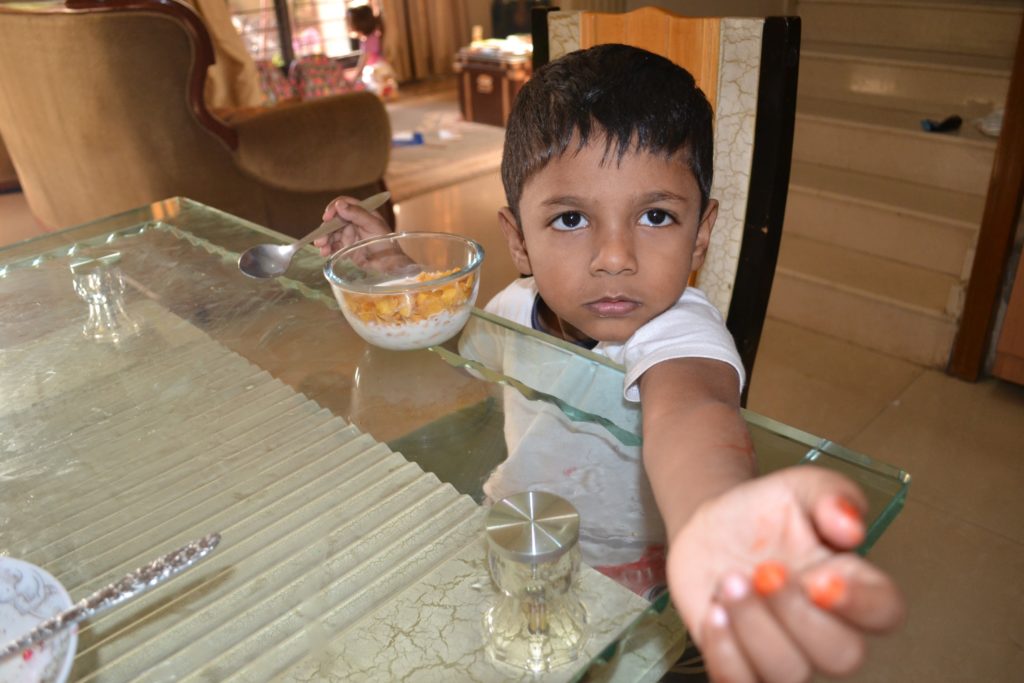 Amy is really good at explaining things using very simple English concepts.  Last night, she explained the premise of Curious George stories and cartoons as “trouble monkey.”  Then this morning at breakfast she went to grab something and told me “keep an eye on Mr. Trouble.”  It didn’t take long after that before Aashish was christened “Trouble Monkey,” a moniker he definitely lives up to.  In the above picture he’s mad at me because I wouldn’t let him touch the camera.  Notice the orange fingernails that he colored with a marker he wasn’t supposed to be using.

A little bit later at breakfast he had a bunch of french toast in his mouth and was trying to tell me something (in Marathi), and I said “buddy, even if you were speaking English there’s no way I’d understand you because you have so much food in his mouth.”  So, instead of chewing and swallowing, he proceeded to spit out all the food that was in his mouth.  Here’s the aftermath: 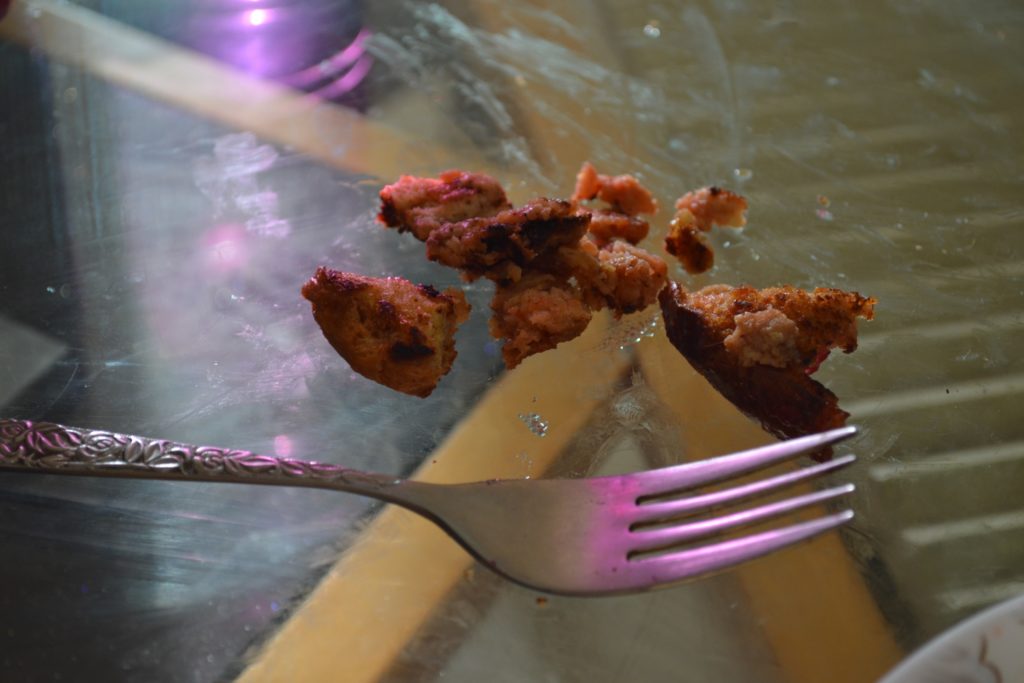 Sometimes he’ll do something and I just shake my head and wonder what in the world could be going on in his little mind.  Here’s a great example.  See this plant stand table on the patio? 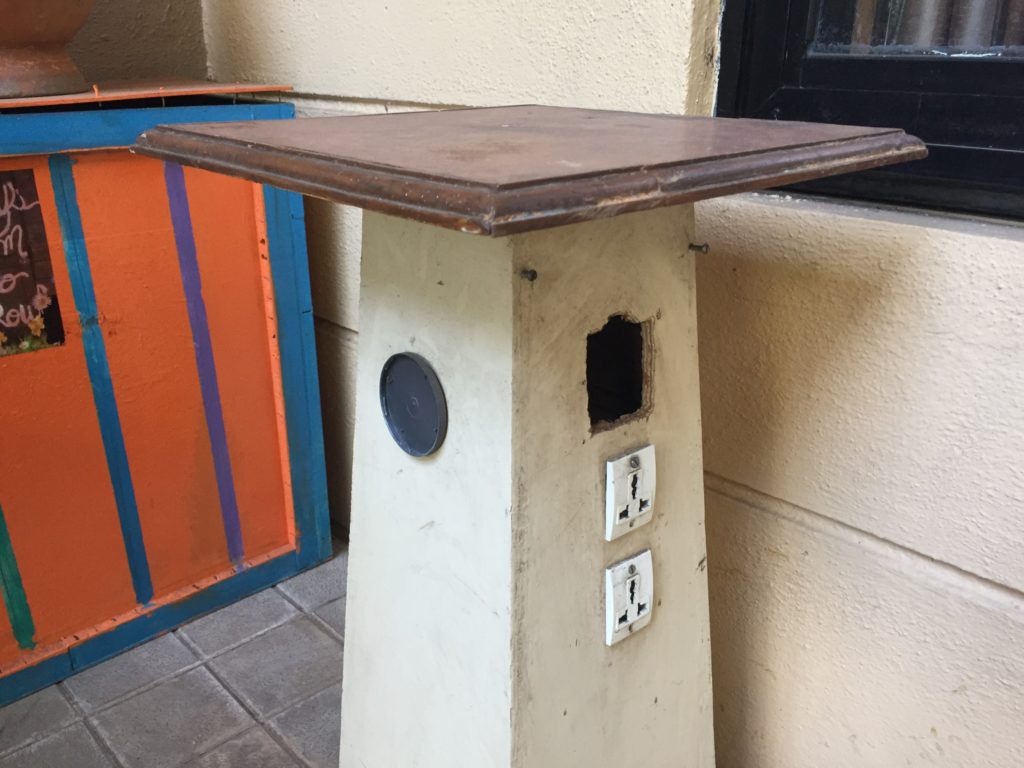 There used to be an LED light attached to that circle.  Now it’s inside the stand.  I was headed into the house to get something, and just as I was going in the door I noticed that in the 32 seconds I hadn’t been watching him he’d pulled the light off and was removing the batteries.  I kept going into the house and figured I’d address it when I came back out.  I was in the house for like 20 seconds, and just as I was coming out the door again he was calmly depositing the light and batteries into that hole.  I considered my options and then just let it go.  Here’s how I envision his internal dialogue:

“Hey!  A circle thingy!  I’d better give it a good yank just to see if anything happens.”  *gives it a yank*  “Wow!  It came apart!  And look at these cylindrical-shaped things … they look crowded and unhappy, so I’d better see if I can rescue them.”  *uses his little 4 year-old fingers to pull out batteries*    “They came out!  Now what do I do?  Hmm … put it all back together?  Nah.  Give it all to my dad?  Boring.   Hmm … hey, a hole!”  *cue dramatic music*  [Spoken quietly and deliberately] “I have been waiting for this moment my entire life, and I know now why God put me on this earth.  It is the DESTINY of this circle thingy and cylindrical thingies to embark on a perilous adventure into that hole, and who am I to stand in their way?”  *deposits items into hole*  “Whew!  That was hard work, but a man’s gotta do what a man’s gotta do.” *looks around for something else to yank*”

This next picture is a barrier – complete with clothes pins to incorporate the curtains – that Shivani and Zinnia built to keep him away when they were trying to color: 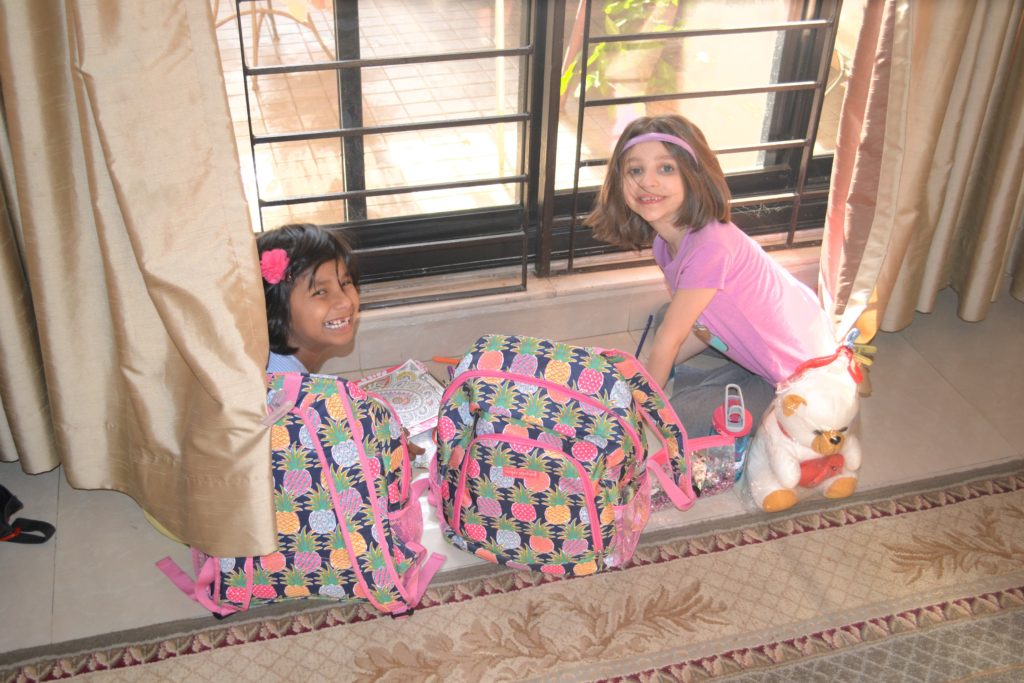 There was another time today when Amy was upstairs getting the girls ready for a bath and I was downstairs with Aashish.  I went to the bathroom, and mid-pee I hear Amy yell “Honey, Aashish is in the way!  Come get him!”  I yelled back “I’m peeing!  I can’t do anything about him yet!”  He must have run upstairs as soon as I went into the bathroom, the little stinker.   Scenes like this occur many times a day in our family.  So yeah, “Trouble Monkey” fits him.  Of course, as soon as you catch him doing something he knows he’s not supposed to do, he flashes you his “you couldn’t possibly get mad at a kid this cute, could you?” smile.  I present, for the jury’s consideration, Exhibit A: 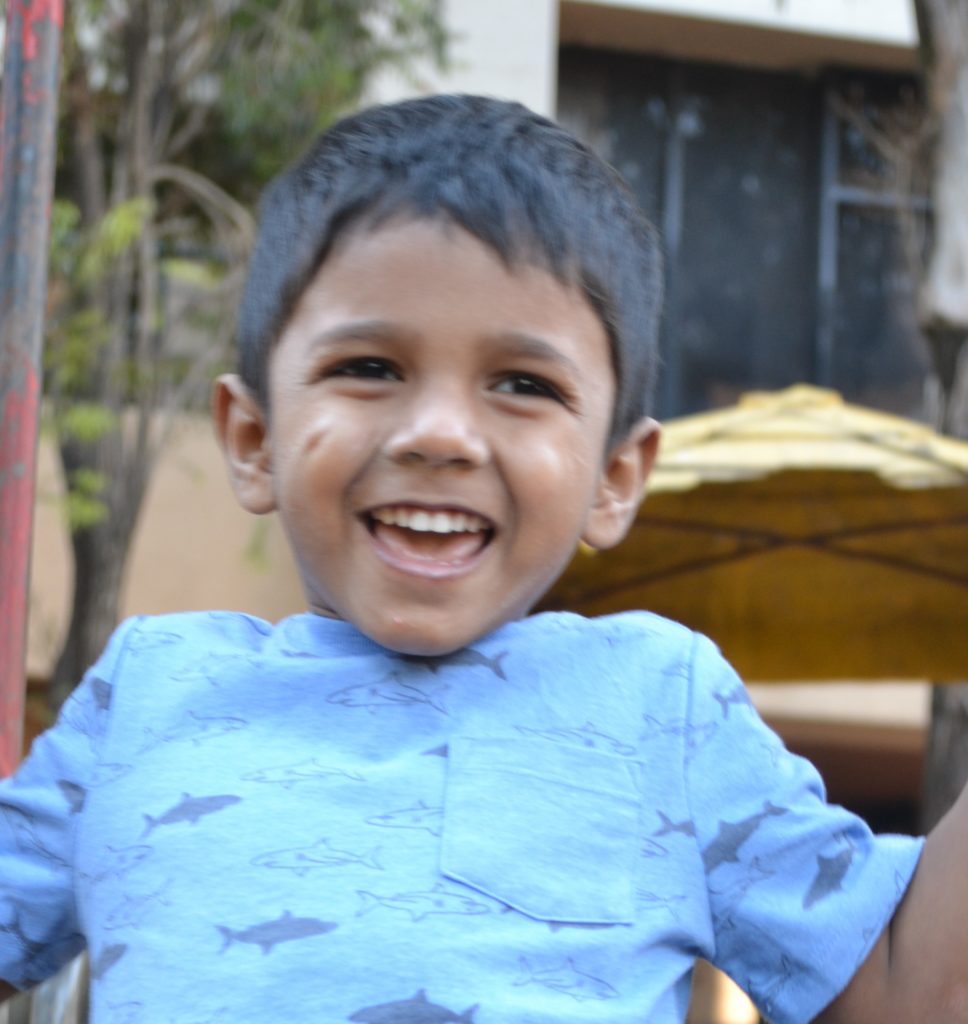 And, just for fun, here’s a picture of him casually picking his nose (we’ll work on that when we’re back in the US): 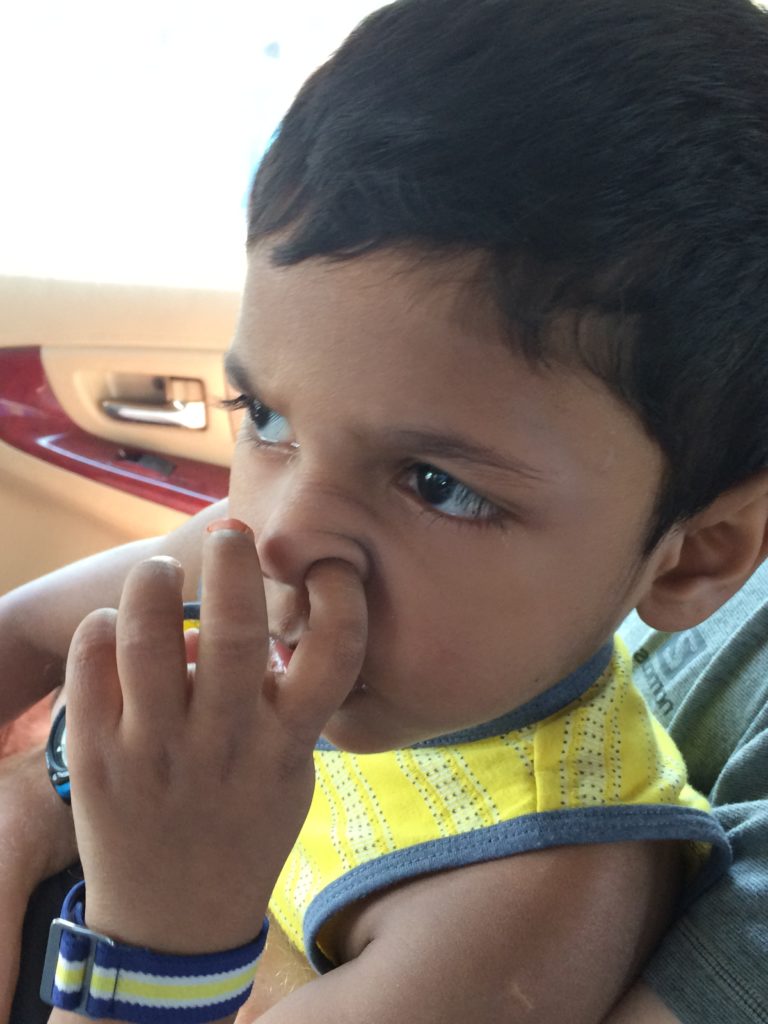 One other cool thing that happened today is we were invited to our driver’s house for dinner (the same guy who saved our bacon with the bank draft issue).  It was all traditional Indian food and customs, with the exception that we specified that Zinnia tolerates no spice at all so please make the food bland.  We sat on the floor, ate with our hands, followed Indian protocol, and everything.  Amy and I were fortunate enough to have this experience this several times when we were in India in 2007, but Zinnia obviously had never even been in an Indian house, let alone sat on the floor to eat.  Amy and I really value authentic cultural experiences, so we were very pleased that Zinnia was given this opportunity.  And yes, I picked rice off Aashish’s socks after the meal. 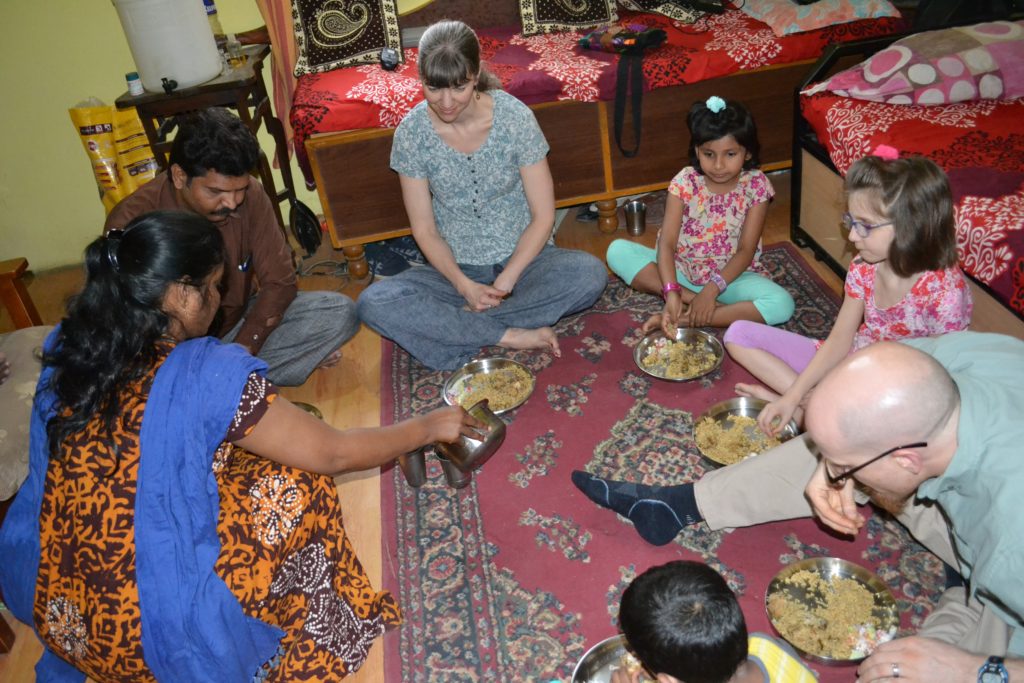 And by the way, Zinnia has been an amazing trooper.  She’s tried nearly all the food we’ve encouraged her to try, her complaining has been very minimal, she’s never pointed and stared, she’s never made any comments or insinuations that the American way is the “right” way and Indians do it “wrong,” she’s used not-very-clean toilets in not-very-clean bathrooms when we’ve been out and about, she’s gone far out of her way to befriend Shivani, and she’s done all this while having GI issues for the past few days.  Pretty incredible little girl – most adults couldn’t do even half as well as her.

Tomorrow we get up earlyish to get on a plane to New Dehli.  There will be a LOT of new experiences for Shivani and Aashish in that adventure!

Leave a Reply to The Swansons Cancel reply